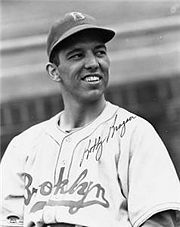 Robert Randall Bragan (born October 30, 1917 in Birmingham; died January 21, 2010 in Fort Worth, Texas) was a Major League Baseball player and manager, and former president of the Texas League and the National Association of Professional Baseball Leagues.

Bragan and his four brothers all played baseball. Bragan signed with the Panama City Pelicans of the Class-D Alabama-Florida League in 1937. He moved up to the Class-B Pensacola Pilots before getting a tryout with the Philadelphia Phillies at their Spring training camp in 1940.

Bragan debuted in the majors as a shortstop for the Phillies on April 16 of that year and hit seven home runs that season. He had his best year in 1941 with 69 runs batted in. He was traded to the Brooklyn Dodgers in 1943 and was used primarily as a utility player and back-up catcher. He dropped out of the majors during the suspension of play for World War II. He enlisted on April 19, 1945 at Fort McClellan and was commissioned a lieutenant and made captain of the Headquarters Team. He was discharged on February 1, 1947 and reported to the Dodger's Spring training in Havana, Cuba.

Bragan returned as a back-up for the Dodgers in 1947. That year he was one of a group of players who petitioned the team not to sign African-American Jackie Robinson. In a 2005 interview, he told of his quick change of heart, saying, "After just one road trip, I saw the quality of Jackie the man and the player. I told Mr. Rickey I had changed my mind and I was honored to be a teammate of Jackie Robinson."

Rickey cut Bragan from the team in July 1948, when the club signed Roy Campanella. Over the course of his 7-year Major League career, the right-handed Bragan hit .240 in 597 games, with 15 home runs. Rickey offered Bragan a job as a player-manager for the Fort Worth Cats in the Texas League. He remained with the Cats for five years, winning championships in his first two seasons.

Bragan went on to manage the Hollywood Stars in the Pacific Coast League from 1953 to 1956. A photograph of Bragan lying at the feet of an umpire who had ejected him, still arguing, was published in LIFE Magazine at the time.

Bragan returned to the Major League as a coach for the Los Angeles Dodgers and Houston Colt .45s. He was given the opportunity to manage the Pittsburgh Pirates (1956-57), Cleveland Indians (1958) and Milwaukee/Atlanta Braves (1963-66). He left each job by getting fired in mid-season. His career record in the major leagues was 443-478 (.481). Known throughout his career for harassing umpires, Bragan was ejected from more than 150 games.

In 1969, Bragan, a Fort Worth resident, began a new career chapter when he became president of the Texas League. One of his first innovations was to dress the league's umpired in multi-colored mock-turtlenecks and windbreakers. In 1975 he was elected president of the minor leagues' governing body, the National Association of Professional Baseball Leagues. He was inducted into the Alabama Sports Hall of Fame in 1980 and the Texas Sports Hall of Fame in 2005.

Upon his retirement, Bobby and his wife, Gwen, made their permanent home in Fort Worth, Texas. After Gwen Bragan’s death, Bobby married Roberta Bloxom in 1985. It was Roberta who suggested to Bobby that he establish a scholarship foundation to encourage youth to do well in school and go on to college. The Bobby Bragan Youth Foundation (BBYF) was established in 1991 under the direction of Jim Beckman, Roberta’s son and has provided over 400 college scholarships to North Texas area eighth-graders.

On August 16, 2005, Bragan came out of retirement to manage the independent Central League Fort Worth Cats for one game, making him the oldest man to ever manage a professional baseball game (besting the Philadelphia A's Connie Mack by one week). True to form, Bragan was ejected in the third inning, thus also becoming the oldest person in any capacity to be ejected from a professional baseball game. Bragan enjoyed the rest of the Cats' 11-10 victory from a more comfortable vantage point.

Bragan died at his home in Fort Worth from a heart attack in January 2010.