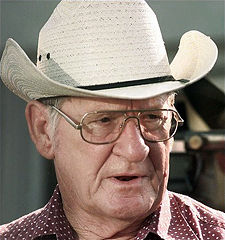 Cherry was trained in explosives while serving in the U. S. Marine Corps, and worked as a truck driver after his discharge. He and his wife, Virginia, had seven children. He was active in the Eastview 13 Klavern of the United Klans of America during the 1950s–60s Civil Rights Movement, and had participated in violence against Fred Shuttlesworth and other movement figures and sympathizers. He brought brass knuckles to use as weapons when Shuttlesworth attempted to enroll his children at Phillips High School in 1957. He was also present at the May 11, 1963 bombing of the Gaston Motel that followed on the heels of a truce in the Birmingham Campaign of marches and demonstrations.

Before the bombing of 16th Street Baptist Church, Cherry had joined with Troy Ingram, Robert Chambliss and Tommy Blanton in the "Cahaba River Group", an offshoot of Eastview 13 that pursued more violent methods of fighting integration. Evidence suggests that it was Cherry who actually carried the bomb from Blanton's car, parked at the western end of the alley bisecting Block 43 behind the church, down the length of the alley and around the corner, placing it under a set of wooden stairs adjoining a window to a women's lounge in the basement. He retraced his steps and was picked up at the same location on 15th Street North after Blanton had turned the car around.

It has never been settled whether the bomb's timed detonator was set to go off during morning services, or if it malfunctioned, turning a planned night-time explosion into a fatal tragedy. Cherry established an alibi by having his 11-year-old son Tom affirm that they two of them had spent the whole morning printing Confederate flag placards at the Modern Sign Company a few blocks from the church (where the bomb may have been assembled).

After the blast, local police, influenced by the hostile attitude of Public Safety Commissioner Bull Connor, focussed on clearing the streets to prevent rioting rather than on gathering evidence for potential prosecution of the crime. The FBI, itself influenced by J. Edgar Hoover's view of the Civil Rights movement, withheld evidence that it had collected about Klan activities from prosecutors.

In 1965 the FBI did name Cherry, Chambliss, Blanton, and Herman Frank Cash as their primary suspects in the bombing. Chambliss was convicted in 1977. Blanton was convicted in 2001, and Cash died in 1994 without facing trial.

Virginia Cherry died of cancer in 1968. Unable to support his seven children alone, he placed them at the Gateway Mercy Home. When Attorney General Bill Baxley reopened the bombing case in 1971, Cherry moved to the Dallas, Texas area. He was interviewed by investigator Bob Eddy at the Grand Prairie Police Station before Chambliss' trial in 1977, but did not provide evidence. He worked as a welder, cab driver, and carpet cleaner until suffering a heart attack in 1988. He and his fifth wife, Myrtle, were residing in rural Henderson County, Texas when he was finally served with an indictment.

Cherry was able to successfully delay his trial by claiming that he was not mentally healthy enough to assist in his own defense. Once his mental competence was established, he maintained his innocence by denying all involvement with the KKK. On this point, he was undercut by his son, Tom, ex-wife Willadean Brogdon, and other associates who all testified that he had been openly involved in the Klan. Brogdan, her brother, Wayne, her daughter, Gloria, and Tom's daughter, Stacy, testified that Cherry had bragged about being part of the bombing, describing the bomb's construction and even claiming to have "lit the fuse".

The FBI presented secret tape recordings, never before revealed to prosecutors, which had been "rediscovered" in 1993. FBI informant Mitchell Burns had made the tapes, and also gave testimony at the trial based on his experiences as a member of Eastview 13 and his friendship with Blanton. One of the tapes, made in 1965, recorded Cherry telling his then-wife, Jean, that "we were making the bomb" the Friday before the blast.

Cherry was convicted in May 2002 on four counts of murder and sentenced to life in prison. His appeal was denied in the Alabama Court of Criminal Appeals. He died of cancer at the Kilby Correctional Facility at the age of 74. He was survived by his son, Tom, and daughter, Karen (Sunderland).

The 1997 Spike Lee documentary "Four Little Girls" helped open the door for Cherry's prosecution, which was announced the day after the film premiered. The 2002 FX television movie "Sins of the Father" with Tom Sizemore starring as Cherry's son, Tom, was based on Cherry's crimes and later life.