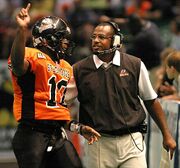 Bobby Humphrey (born October 11, 1966, in Birmingham), is a vice president at Bryant Bank, a former professional football player, and former head coach of the Birmingham Steeldogs.

Humphrey grew up in Birmingham's Elyton Project. He signed with the Alabama Crimson Tide out of Glenn High School. Over his four seasons as a starter, Humphrey rushed for 3,420 yards, caught 60 passes for 523 yards, and scored 40 touchdowns. He made the College Football All-America Team in 1986 and 1987. In 1986, he set a school record with 1,471 rushing yards, which stood until Mark Ingram Jr's 2009 Heisman-winning season. In 1987, he was voted as UPI's offensive player of the year and finished 10th in the Heisman Trophy balloting.

Humphrey was selected in the 1st round of the NFL's supplemental draft in 1989 by the Denver Broncos. During his rookie season, he rushed for 1,151 yards and seven touchdowns for the Broncos as they qualified for Super Bowl XXIV, but were defeated 55-10 by the San Francisco 49ers. Humphrey, however finished the game as the Broncos leader in both rushing (61 yards) and receiving (31 yards). Humphrey was not named NFL Rookie of the Year, due to Barry Sanders' incredible 1,470-yard rookie campaign. He followed his impressive rookie performance with a Pro Bowl selection in 1990, rushing for 1,202 yards and 7 touchdowns in 1990.

In 1991, Humphrey held out of training camp in hopes of obtaining a new contract. The Broncos, by team policy, refused to renegotiate his pay and the holdout continued late into the season.

Unable to secure a new contract, Humphrey finally ended his holdout in week 14. But by that time, newly signed Gaston Green had emerged as the team's starting running back and was on his way to completing his own 1,000-yard season. Furthermore, Humphrey had fallen out of favor with the team's coaching and front office as a result of the holdout. When Humphrey returned in week 14, he was out of shape and given only a reserve role. He remained on the bench as Denver made a run to AFC Championship Game, losing to the Buffalo Bills 10-7.

The following off-season he was traded to the Miami Dolphins in exchange for running back Sammie Smith. He played for the Dolphins from 1992 to 1993 but was never able to regain the success he experienced in Denver.

On January 31, 1993, Humphrey was arrested for cocaine possession in Columbus, Georgia. Not long afterward he was shot in the leg during a fight in Alabaster.

In 2000 Humphrey was hired as the head coach of the Birmingham Steeldogs of the Arena Football League 2 (af2). In five seasons, he established himself as the league's winningest coach. He was named the 2009 Golden Flake Legend of Birmingham before the January 2, 2010 PapaJohns.com Bowl.

After the Steeldogs folded, Humphrey became a salesman for Ready Mix USA in Birmingham. In March 2012 he became a vice president at Bryant Bank. Both firms were owned by Paul Bryant Jr. In May 2014 Humphrey was appointed to the Hoover Parks and Recreation Board.

Humphrey's wife, Barbara Humphrey, was appointed to represent District 7 on the University of Alabama Board of Trustees in September 2014. Their son Maudrecus was a standout at Hoover High School and played two seasons with the SEC's Arkansas Razorbacks. He was dismissed from the team after a burglary arrest and avoided criminal prosecution by agreeing to enter drug rehabilitation. He enrolled at UAB in February 2013 and, after sitting out a year, played his senior season under his former assistant coach Garrick McGee, as a member of the 2014 UAB Blazers football team.

Humphrey's daughter Breona is a track and field athlete for UAB. Another son, Marcus studies management at Alabama.