From Bhamwiki
(Redirected from Borat)
Jump to: navigation, search

Sacha Baron Cohen is a British comedian who has filmed segments of at least 3 feature length films in the Birmingham District. He starred as a French Formula One turned NASCAR racer in the 2006 Will Farrell comedy, Talladega Nights: The Ballad of Ricky Bobby, which was filmed partially at Talladega Superspeedway. The 2006 feature Borat: Cultural Learnings of America for Make Benefit Glorious Nation of Kazakstan and the 2009 feature Brüno were also partially filmed in various locales including Birmingham, Helena, Anniston, and Vestavia Hills. 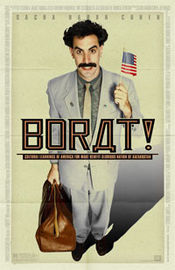 Borat, directed by Larry Charles, chronicles, in mock-documentary style, an extended visit by a Kazakhstani television reporter to the United States. The reporter, Borat Sagdiyev, is played by Cohen who created the character in 1998 for the British television show, "The 11 O'Clock Show".

Two segments for the film were staged in Birmingham. Baron Cohen visited the city under the guise of learning about Southern values and manners. His first visit was to Kathie Martin, owner of the Etiquette School of Birmingham, who advised him not to show nude photographs of his "son" to other guests at a party. A planned dinner at her house was canceled due to technical difficulties.

The second segment was the actual dinner party at Magnolia Springs Manor in Helena organized by Cindy Streit of Etiquette Training Services. The dinner was arranged with the understanding that a Kazakhstani dignitary would be visiting. A contract was signed, stipulating the purpose of the dinner and the guidelines for filming.

Guests included Ben McKinnon, Sarah Mosely, Mike Jared and Cary Speaker, pastor of Mountain Brook Presbyterian Church and his wife Sally. Baron Cohen's character attempted to sabotage the evening's decorum by telling "crude jokes" and trying to goad other diners. At one point, Baron Cohen produced a bag of excrement, prompting Streit to lead him away from the table. Later, an apparent prostitute arrived at the door claiming to have been hired to entertain. At this point, Speaker and his wife left and "Borat" was told that the dinner had concluded.

After finding out the true nature of Baron Cohen's "documentary", his Birmingham-area targets seemed to have taken the joke in stride. Martin told Newsweek that she was disappointed never to have been let in on the joke, and that she "would've liked [her] 15 minutes of fame in this life to have been for something more worthwhile than an R-rated movie." while Jared told the Birmingham News that "All things considered, we got out of this pretty clean." 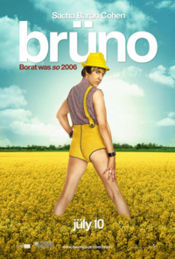 On February 9, a man believed to have been Cohen in the guise of "Bruno", a flamboyantly homosexual Austrian talk show host, attended a dance sponsored by the JBY Ballroom Dance Club at the Wald Park Lodge in Vestavia Hills. After receiving instruction, a leather-clad male who claimed not to know English was joined by a tall, spike-haired male partner. The two performed a tango to "horrible" music brought by the crew, ending with a long, sensual kiss. At that point the cameras were turned on the crowd to get reactions. Attendees attempted to disrupt the filming by turning off the lights and asking the film crew to leave the premises. Leaders of the dance club also alerted other organizations in the South, many of which canceled agreements with the filming company.

On February 13, Cohen participated in a few hours' demonstration of officer candidate training school at the Alabama Military Academy in Anniston. Filming ended when a cadet recognized him.

After being contacted about appearing in a German documentary, Point of Grace Church youth pastor and former executive director of the Alabama Coalition Against Same-Sex Marriage Jody Trautwein agreed to come to a Huntsville home for a staged "counseling session" with the Bruno character. As they spoke Trautwein explained that faith in Christ can help individuals overcome homosexual tendencies and asked the star if he was ready to ask Jesus into his heart. Cohen responded by asking if Trautwein was hitting on him. Trautwein was offended by Cohen's barrage of "vile, repulsive" questions, but is heartened that, even after heavy editing, his witness for Christ did make the final film. He hopes that the message reaches some viewers who otherwise may not have been exposed to the gospel.

While in Madison County, cameras filmed Cohen being lectured by a sheriff's deputy about his attire.

The footage was gathered for the 2009 feature film Brüno featuring the character.

In February 2018 the producers of an upcoming Sacha Baron Cohen program for Showtime offered an expense-paid trip to Washington D.C. to former U.S. Senate candidate and Alabama State Supreme Court chief justice Roy Moore. The trip was ostensibly offered for Moore to be presented with an award for his strong support for Israel. During the visit Moore was interviewed on camera Baron Cohen in the guise of "Colonel Erran Morad," an Israeli anti-terrorism expert. Baron Cohen brought out a device which he claimed was used in Israel to detect pedophiles through a hormone in their perspiration. After Baron Cohen demonstrated the device, which emitted an audible alarm in Moore's vicinity, Moore objected and walked off the set. Moore later issued a statement calling the stunt a "defamatory attack" and threatening legal action. The episode with Moore's interview aired in July.