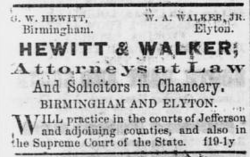 1874 ad for Hewitt & Walker
The firm traces its history to the partnership of John Morrow and Goldsmith Hewitt II, which was first formed in 1858, but dissolved when Morrow was elected probate judge and remained idle during Hewitt's service in the Confederate army in the Civil War.

After the war, Hewitt returned to the practice of law and, in 1870, entered into partnership with another Jefferson County native, William Walker Jr in Elyton. The two principals of Hewitt & Walker also participated as partners in the firm of Hewitt, McQueen & Co. in Walker County

The firm moved with the Jefferson County Courthouse to Birmingham and became Hewitt, Walker & Porter with the addition of Mitchell Porter in 1884. Their offices were then located at 2026 1st Avenue North.

From 1924 to 1945 the firm was known as Bradley, Baldwin, All & White, recognizing William White and Ernest All as partners. Douglas Arant, who had joined the firm in 1923 and became a partner in 1927 was added to the firm's name in 1945, rendering it White, Bradley, Arant & All. The addition of William Rose expanded the nameplate to White, Bradley, Arant, All & Rose in 1951.