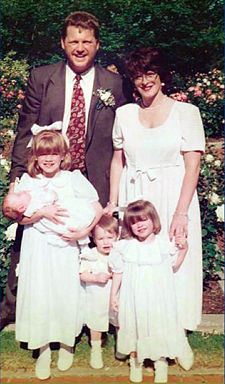 Brian Tribble with his family in 1997

Brian Tribble (born May 20, 1961 in Birmingham; died October 3, 1997 in Center Point) was a music minister and actor who was murdered after surprising a burglar at Centercrest Baptist Church.

Brian was the son of Don and Brenda Tribble. He was born at South Highlands Hospital and raised at the Irondale Mobile Home Park. Don, a member of the Woodlawn High School Warblers sang to him as a child. The family moved to Center Point in 1971 and he attended Erwin High School and Centercrest Baptist Church.

After graduating, Tribble became a nightclub singer and worked at Opryland in Nashville, Tennessee. He came back to the church later, and gradually devoted his talents to its ministry. Beginning in 1990, he worked as assistant pastor for music and education under pastor Bob Curlee at Centercrest. He frequently performed in plays Curlee had written, including a one-man performance on the life of golfer Charley Boswell. He also worked a late shift for United Airlines as a ticket clerk and announced football games at Erwin.

Early on the morning of October 3, 1997, Tribble arrived at the church to cook breakfast for a group traveling to a Promise Keepers rally in Washington D.C. He discovered Milton Dudley, a 23-year-old who lived at the nearby Farrington Apartments with one of his girlfriends, in the act of attempting to break into the church's vending machine.

Dudley shot him twice, the second time at close range, and fled without taking anything from the church. He pleaded guilty to felony murder in 2000 and was sentenced to life without parole. National media coverage of the Promise Keepers event often alluded to Tribble's murder, contrasting his spiritual life with that of his killer.

Tribble was survived by his wife, Roxanne, and four children. Auburn free safety Rob Pate was a close friend of Tribble's and wore "B. T." on his wristbands through the 1998 season. His former pastor, Curlee, wrote a 2007 play "A Redneck Meets John Wesley" and a 2011 book, Brian Has Left the Building, about Tribble's life story.