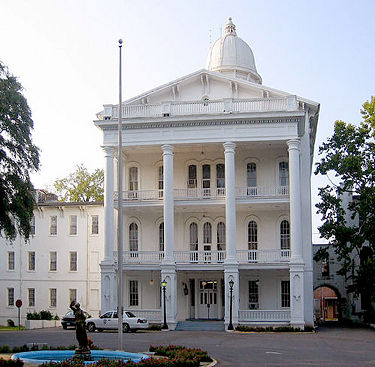 Bryce State Mental Hospital, which first opened on April 5, 1861 in Tuscaloosa, is Alabama's oldest and largest inpatient psychiatric facility. The hospital sits on a 200-acre site which also includes a patient cemetery, a superintendent's residence, and several other structures.

The hospital currently houses 464 licensed beds for acute care, treatment and rehabilitation of full-time (committed) patients. Of those, 342 were in use at the start of fiscal year 2009. The Harper Geriatric Hospital, a separate facility on the same campus, provides an additional 100 beds for inpatient geriatric care.

The original 1861 building stands as the most fully-realized example of the influential "Kirkbride Plan" for institutionalizing mental patients, as proposed by social reformer Thomas Kirkbride mid-19th century and elaborated later by Philadelphia architect Samuel Sloan. The hospital was added to the National Register of Historic Places in 1977. There is a tentative agreement for the state to sell the hospital property to the adjoining University of Alabama for expansion of its campus, leaving the future of the historic buildings uncertain, but perhaps with promise for preservation through adaptive re-use. Earlier the University had opposed efforts to seek National Historic Landmark status for the hospital, but later determined that such a designation would not impede its plans. 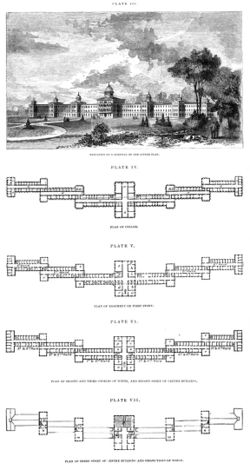 Planning for a state hospital for the mentally ill in Alabama began in 1852 after the legislature authorized the creation of an Alabama Insane Hospital on a 326-acre tract adjacent to the University in Tuscaloosa. The new facility was planned from the start to utilize the "moral architecture" concepts of 1830s activists like Kirkbride and Dorothea Dix. Sloan designed the imposing Italianate building directly after Kirkbride's model plan. The construction was an important source of employment in Reconstruction-era Tuscaloosa.

The hospital's first superintendent was Peter Bryce, a 27-year-old psychiatric pioneer from South Carolina. His tenure was marked by absolute discipline among the staff of the hospital. He demanded that patients be given courtesy, kindness and respect at all times. The use of shackles, straitjackets and other restraints was discouraged, and finally abandoned altogether in 1882. Various work programs and other activities were encouraged, including farming, sewing, maintenance and crafts. There was even a small coal mine on the campus used for job training. Between 1872 and the early 1880s, some of the patients wrote and edited their own newspaper, called The Meteor. These writings provide a rare inside look at life in a progressive mental institution in the late 19th century. At that time, Bryce's management and commitment to "scientific treatments" was recognized around the country as in a class of its own. Bryce died in 1892. The legislature renamed the hospital in his honor in 1900.

During the 20th century the patient population expanded while standards of care fell to abysmal levels. By 1949 a report indicated that Bryce and the state's second mental hospital, Searcy (Mt Vernon, Mobile County) , had by far the largest patient load in the nation. 10 full-time staff were charged with the care of 5,732 patients.

Alabama Governor Lurleen Wallace was appalled after viewing the facility in February of 1967, and earnestly lobbied for more funds for the institution.

Psychiatrist Humphry Osmond, a professor at the University of Alabama School of Medicine, researched the effects of large doses of vitamins on patients at Bryce in the 1960s and 70s.

Low funding continued, and in 1970, Alabama still ranked last among U.S. states for mental health expenditures. Bryce Hospital at that time had 5,200 patients living in conditions that a Montgomery Advertiser editor likened to a concentration camp. That same year, a cigarette tax earmarked for mental health treatment was cut. 100 Bryce employees were laid off, including 20 professional staff. Members of the Department of Psychology at the University of Alabama attempted to file suit on behalf of the laid-off workers, but Federal Judge Frank M. Johnson ruled that the courts had no standing to intervene on behalf of fired employees. He left open, however, the possibility of a suit filed on behalf of patients, whose quality of care was affected.

Ricky Wyatt, a fifteen-year-old who had always been labeled a "juvenile delinquent" and housed at Bryce despite a lack of any indications of mental illness, was the named plaintiff in a class-action lawsuit filed on October 23, 1970. His aunt, W. C. Rawlins, was one of the employees that had been laid off. Together they testified about intolerable conditions and improper treatments designed only to make the patients more manageable. In 1971 the plaintiff class was expanded to include patients at Alabama's two other inpatient mental health facilities, Searcy Hospital and Camp Partlow (Coker, Tuscaloosa County). The resulting court-ordered agreements formed the basis for federal minimum standards for the care of people with mental illness or mental retardations who reside in institutional settings. In 1999 a new settlement agreement was made recognizing a great deal of progress. The case was finally dismissed on December 5, 2003 with the finding by Judge Myron Thompson that Alabama was in compliance with the agreement.

The standards elaborated in that agreement have served as a model nationwide. Known as the "Wyatt Standards," they are founded on four criteria for evaluating care:

The case of Wyatt vs. Stickney came to a conclusion after 33 years, through the tenure of nine Alabama governors and fourteen state mental health commissioners. This was the longest mental health case in national history. The State of Alabama estimates its litigation expenses at over $15 million.

In 1996 the Mary Starke Harper Center for geriatric patients opened on the Bryce campus. It is the first psychiatric facility designed specifically for the elderly.

Because the model for mental health care has evolved from a focus on hospital stays toward community-based programs, most of the hospital's original 1861 building is now empty, save for two floors of administrative offices.

Between 2007 and 2009 a tentative agreement was reached for the state to sell the Bryce property to the University for expansion of its campus. Mental health advocates hope that the sale would allow for patient care to improve at other facilities and in more modern community-based programs. Preservationists hope to secure the university's commitment to preserve the historic structures, something which could never be a priority under the custodianship of the mental health system.

In 2010 the Bryce Historical Committee erected markers at four burial sites on the Bryce campus (which is now bisected by Jack Warner Parkway). The patient cemeteries date to the hospitals opening, but records are scant before 1922. It is estimated that about 5,000 individuals were buried in the four sites. About 40% of those graves are marked, most with only a number.