This article is about the NBA player. For the vocalist, see Burly Clyde. 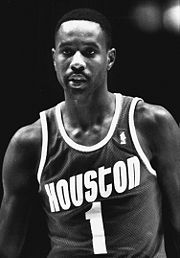 Johnson played for coach Jack Doss at Hayes High School and was Alabama's "Mr Basketball" in 1982. He was selected by the Houston Rockets in the 1st round (20th overall) of the 1986 NBA Draft. A 6'7" forward from the University of Alabama, Johnson played in 7 NBA seasons from 1986 to 1993. He played for the Rockets from 1986-1992 and for the Washington Bullets during the 1992-93 season. Johnson graduated from Hayes High School. Johnson's best year as a pro came during the 1990-91 season as a member of the Rockets when he appeared in 82 games and averaged 14.8 ppg. In his NBA career, Johnson played in 505 games and scored a total of 4,617 points.

Johnson finished his playing career with the 2005-06 Birmingham Magicians. He worked as a consultant for the Birmingham Athletic Partnership, and was inducted into the Alabama Sports Hall of Fame in 2007. In February 2014 Johnson was hired as athletic director for Birmingham City Schools. During his term, athletic achievements improved across the board and many schools expanded programs and improved athletic facilities. Johnson was dismissed by Superintendent Kelley Castlin-Gacutan at the end of his probationary period in September 2016.

Johnson's son Jamal graduated from Spain Park High School and accepted a basketball scholarship from the University of Memphis in 2016.