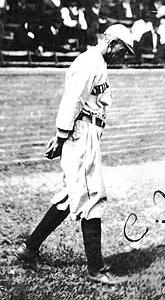 C. I. Taylor managing the ABCs

Charles Isham Taylor (born January 20, 1875 in Anderson, South Carolina - died February 23, 1922 in Indianapolis, Indiana) was a baseball player and manager, and the organizer of the first African-American professional baseball team in Birmingham.

Taylor was the sixth of 13 children born to a Methodist minister in South Carolina. He and his four brothers, Johnny, Jim, and Ben all played in the loosely-organized Negro leagues of the late 19th century.

Taylor served with the all-black 10th US Cavalry Regiment in the Phillipines during the Spanish-American War. Afterwards he attended Clark College in Atlanta, Georgia and made a name for himself as a talented second baseman for the college's undefeated 1900 team. Recruiting players from other black colleges in the South, Taylor organized the Birmingham Giants, the first professional black baseball team in Birmingham in 1904. In 1910 the team moved to West Baden, Indiana and became the "Sprudels".

During his time as a player-manager in West Baden, Taylor is reported to have corrected an umpire who ruled him safe when he tried to steal second, kicking up a cloud of dust. He announced to the crowd that he was an honest man, declared himself "out", and returned to the dug-out.

In 1914 Taylor moved the team again, patnering with the American Brewing Company to form the Indianapolis ABCs. As manager he helped the ABCs become a powerhouse team, defeating Rube Foster's high-powered Chicago American Giants by winning four straight games in their 1916 championship series.

The team's roster was depleted by America's entrance into World War I. As an owner, Taylor helped Foster create the first Negro National League in 1920 and served as its vice-president. During the 1922 league meetings in Chicago, Taylor fell ill and eventually died of pneumonia at home at the age of 47. He was eulogized by Foster as well as by prominent African-Americans Freeman Ransom and Sumner Furniss.

After his death Taylor's widow Olivia took over 75% of his stake in the ABCs while his brother Ben held the remaining 25% and managed the team. The club, facing stiff competition for players from the Eastern Colored League, folded in 1926.

Taylor is buried at Indianapolis' Crown Hill Cemetery. He has been nominated previously as a candidate to join his brother Ben in the Baseball Hall of Fame.