From Bhamwiki
(Redirected from CIO Singers)
Jump to: navigation, search 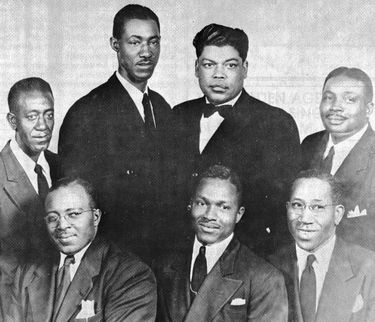 When a group of steel workers from Steel Workers Organizing Committee Lodge No. 2140, led by George Bestor, determined to form a singing group on September 8, 1929 they invited Charles Bridges to train them at Willie Ervin's home in Pipe Shop. Other charter members included Tom Bell and Tom Lacey.

Soon the group became well-known for their harmony and showmanship—featuring flexible meters, dramatic pauses and long-sustained notes. Their recordings from the 1930s were influential nationwide.

Though formed as a gospel group, the Jubilees were always associated with union activities as well. A popular practice in that era was to rewrite the words to a popular spiritual, transforming it into a "work spiritual" or "union spiritual". Performing as the SWOC Quartet they were a staple at weekly union meetings and socials.

After the group performed at the SWOC Convenction in Chicago, Illinois in 1940, they became associated with the larger Congress of Industrial Organizations (CIO), and performed as the CIO Singers at larger labor functions. When United Steelworkers of America/CIO president Philip Murray died in November 1952, Thompson produced a tribute to him, which was issued under his own label, Tiger Records.

John Alexander, a member of the group since 1954, followed by Sam Lewis in 1956 and Sam Johnson in 1960. In 1980 the Sterling Jubilees included those three, along with Henry Holston, Unice Cook, and Tom Lacey

As senior member following Bestor's death, Alexander's name became attached to the ensemble when Holston left to form a rival version of the Sterling Jubilee Singers. Archie Garner joined the group in 1989

Well into the 1990s the group kept to a weekly rehearsal schedule with Wednesday morning meetings at Straight Place. Those meetings included business and disciplinary matters, including the assessment of fines for tardiness or for not wearing the prescribed uniform for particular performances. Ruby Alexander served as recording secretary and costume committee, and also sang several parts with the group.

They have also shared arrangements and techniques with newer groups, including the Birmingham Sunlights. The Sterling Jubilees were presented with a "Musical Heritage Award" at the 1994 City Stages music festival. They performed alongside Dorothy Henderson's Silver Voices at the 1998 City Stages. The group was also featured in the 1985 British Channel 4 documentary "On The Battlefield: Gospel Quartets in Jefferson County, Alabama" and recorded an album in 1994 for New World Records.

The Alabama State Council on the Arts presented the Sterling Jubilees with the Alabama Folk Heritage Award in 1999. Due to infirmity, the group did not continue performing in the 2000s.