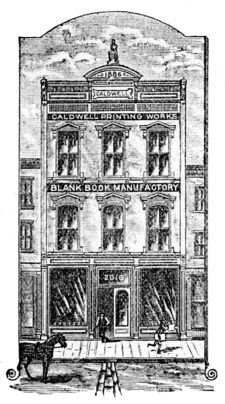 The Caldwell Printing Works was a printing press and bindery located at 2016 Morris Avenue, in the building currently housing the Peanut Depot.

The business was founded in 1881 by Charles Caldwell son, of Elyton Land Company president Henry Caldwell. Charles' career as a printer had begun when he received a small Golding & Co. "Junior" 2"X3" press as a gift at age 13. He kept the small device in a glass globe in his office.

Caldwell joined with his brother, John to start the business, and added T. W. Carpenter as a partner in 1886. The firm was incorporated as the Caldwell Printing Company in 1888.

The press offered a broad range of printing and publishing services, including color reproductions, with a specialty in posters and showbills. In 1887 the printing department was supervised by J. D. McClintock and the bindery by Charles Patterson.