Celery-Cola was a celery-flavored soft drink created in 1887 by James Mayfield and manufactured in Birmingham by his Celery-Cola Company from 1899 to 1910, when the Pure Food and Drug Administration successfully prosecuted the company for unhealthful amounts of cocaine and caffeine in its beverages.

Mayfield, an Alabama chemist, and two other investors partnered with Atlanta, Georgia patent medicine entrepreneur John Pemberton in 1888. Before Pemberton died late that year, they learned from him the secrets of producing medicinal syrups that could be mixed with soda water to make refreshing beverages, such as the "Coca-Cola" formula that Pemberton has sold to George Lowndes. In 1893 Mayfield and his partners sold the remainder of the Pemberton Medicine Company to T. J. Eady, keeping only the formula to their "Kola" beverage, for which they founded the Wine Coca Company. Meanwhile, Eady hired Mayfield back as general manager for his overall real-estate, banking and manufacturing enterprise.

In 1895 Mayfield secured sole ownership of the Kola formula and, with his wife Diva, produced bottled sodas for Atlanta's Cotton States Exposition. She divorced him the next year and, as Diva Brown, became one of his main competitors. 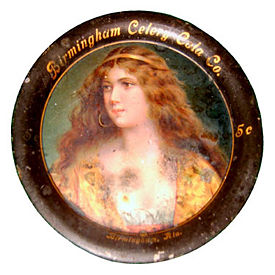 Mayfield and partner Henry Brittain opened the J. C. Mayfield Manufacturing Company in 1899 at 2114 Morris Avenue in Birmingham, manufacturing extracts which they marketed and sold to bottlers across North and South America. He soon opened additional offices in St Louis, Missouri and Nashville, Tennessee. The main offices moved to Nashville in 1901, just as he gave his sons; Stephen, Joseph and Carl, control of the manufacturing business and focused his own efforts in the development of oil wells in Kentucky and Tennessee.

The Pure Food and Drug Administration began a court battle to establish that Celery-Cola contained dangerous levels of cocaine and caffeine which were not disclosed in its labeling. The suit was won in 1910, and the resulting negative publicity forced the business to close that year. Mayfield launched a new venture, the Koke Company of America, the following year in St Louis. The Coca-Cola Company sued him in 1914 for Trade Mark infringement and won its appeal to the U. S. Supreme Court in 1920. Mayfield launched the Mayfield Beverage Company, also in St Louis, shortly afterward, marketing his soft drinks as "Dope", reviving Celery-Cola, and adding "Cherri-Kick" to the line. The company, renamed "Celery-Cola Corporation of America" was successful through the 1920s, but did not survive the Great Depression.