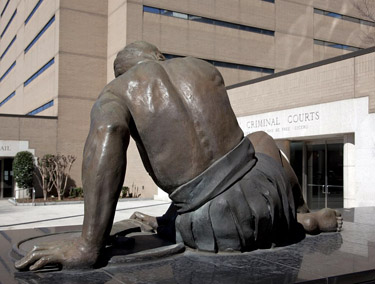 "Centurion: Jus Fides Libertatum" is a bronze sculpture depicting a wounded warrior located outside the Mel Bailey Criminal Justice Center on 8th Avenue North in downtown Birmingham. It honors Jefferson County law enforcement professionals who gave their lives in the line of duty. It was sculpted by Branko Medenica, beginning in 1989 with a $55,000 commission from the Fraternal Order of Police Birmingham Lodge No. 1 and dedicated on October 27, 1991. The names of officers killed since 1889 appear on the sides of the granite base. A rededication ceremony with additional nameplates installed was held on May 28, 1998.

The larger-than-life statue was inspired by the "Dying Gaul", a 230 B.C. Roman copy of an older Greek sculpture which is exhibited at the Capitoline Museum in Rome. The mostly-nude figure wears a short cloth skirt and shows a wound on his left side. A shield and broken sword lie beside him. The subtitle "Jus Fides Libertatum", meaning "Law is a safeguard of freedom", also appears on the emblem of the Fraternal Order of Police. The three-tiered base is clad in black granite and is about 5 feet x 9 feet x 5 feet high.

A Birmingham Police officer modeled for Medenica at his 25th Street South studio. The bronze itself was cast in West Palm Beach, Florida.