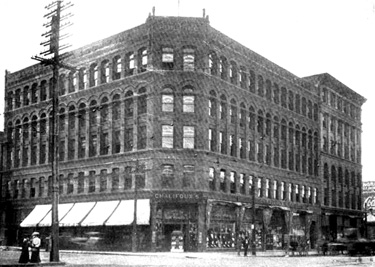 The Chalifoux Building in a 1905 publication

The Chalifoux Building, located at 1827 1st Avenue North, on the southwest corner of 19th Street, was built in 1893 to house a branch of the Chalifoux Department Store.

The chain was owned by Joseph Chalifoux of Lowell, Massachusetts. Joseph's brother Oliver came to Birmingham from Chicago in 1890 to operate the new store. The brick building, designed by the firm of Wheelock, Joy & Wheelock, was 5 stories tall and clad with pressed brick with arches crowning the 4th and 5th floor windows.

The 12,000 square foot basement was excavated into solid bedrock by blasting and poured in concrete. With five floors above, the total floor area of the building was 72,000 square feet. The main store occupied 10,000 square feet on the ground level, divided by walnut, poplar and oak furnishings to define the many various departments.

The main entrance faced directly into the intersection from the chamfered two-bay corner. Its heavy oak-trimmed doors with plate glass shutters opened into a tiled vestibule. The display windows of plate glass cost $200 each, and a central sky-lit atrium provided light to the interior offices as well as the sales floor.

The other 2,000 square feet at street level was occupied by Gray & Dudley Hardware Co.. The Chalifoux Building's upper floors housed the store's offices, as well as those of the Jefferson County Health Office and the United Mine Workers. A telephone cable with fifty-two wires was connected to the building from the central exchange on the third floor of the Terry Building a block away.

The department store closed during the 1907 financial panic, and the building burned down soon later. The site was used for a new 7-story Lincoln Life Building, which was erected in 1909, quickly became the home of the Birmingham Chamber of Commerce, and currently houses the Jemison Flats apartments.