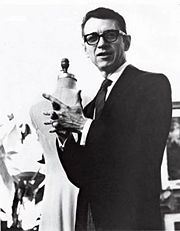 Kleibacker's family owned a department store in Cullman. He studied journalism at the University of Notre Dame and returned Birmingham as a newspaper reporter before moving to New York to study retailing at New York University. While a student he began working as a courier, and later copywriter for the advertising department of Gimbels department store.

As an ad writer for De Pinna, he met cabaret singer Hildegarde and became her tour driver. While working for her he became interested in fashion design. He paid an experienced acquaintance, Madame Burg, to tutor him in the technical aspects of design. With her help, he completed a portfolio of sketches, and ultimately landed a job as assistant to Antonio del Castillo, head deisgner for Lanvin in Paris in 1954.

In 1957 Kleibacker returned to New York and took a job with Nettie Rosenstein, then in 1960 launched his own collection with a studio at the Hotel Park Royal. His collection was known for its masterful use of the bias cut in classically-shaped garments of silk. Some of his clients included Pat Nixon, Diahann Carroll and Mary Travers.

After retiring in 1983, Kleibacker continued to teach aspiring designers at colleges, including a residency at Ohio State University. He began curating exhibitions. He joined the staff of the Columbus Museum of Art as an adjunct curator and assisted in the acquisition of numerous important examples of fashion design, now the basis of the Historic Costume and Textiles Collection at Ohio State's College of Human Ecology.

Kleibacker died in 2010 from pneumonia.