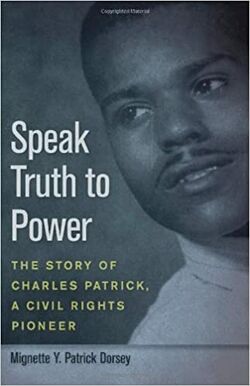 Charles Patrick (born 1918 in Camp Hill, Tallapoosa County) is a former mail carrier, furnace worker and cook. He is notable as the victim of brutal beating at the hands of Birmingham police officers in 1954. Though such beatings of African Americans were prevalent, he was the first to successfully file assault charges that resulted in the firings of officers involved.

Patrick's family moved to Avondale when he was two years old. He attended Kingston Elementary School and dropped out of Industrial High School to support his family after his father lost his sight. He later earned his GED and enlisted in the U. S. Navy in 1943. He was discharged in late 1945 and married his wife, Rutha. He later joined the Army and was called to duty in the Korean War, but was given an honorable discharge to stay with his pregnant wife.

Patrick first worked at Avondale Mills before taking a job with ACIPCO in 1951. He worked in the furnace until a leg injury forced a demotion to cook. He and Rutha, a part-time Pizitz seamstress, bought a house at 3221 62nd Street North in Washington Heights and a 2-door Ford automobile, which saved him a pre-dawn walk through Forest Hill Cemetery to reach a bus stop.

In 1954 Patrick drove downtown with his step-son to buy a Boy Scout uniform. As he circled the blocks around the store, he saw a car about to pull out and pulled ahead of it to parallel park. Margaret Lynch, a white woman, pulled forward into the space as soon as it opened. Patrick stepped out of his car and told her that he had been waiting for the space and asked why she had taken it. She replied that her husband was a policeman. Patrick told her that "That doesn't mean he owns the streets of Birmingham," and then drove off.

That night, officers L. L. Marlowe and J. P. Renshaw went to Patrick's home and arrested him on charges of vagrancy and disorderly conduct. The next day Lynch's husband, Arthur and his partner Jack Siniard went to the jail. Deputy Warden Earl Jackson opened Patrick's cell and the two officers took him to another room and beat him for several minutes for "sassing" a white woman. Patrick returned to his cell and was denied medical attention until his release the next day. He was then treated by an ACIPCO doctor and unable to return to steady work before the end of January 1955.

Rather than keep quiet about the incident, Patrick contacted attorney Malcolm Wheeler and filed assault charges against the police department in Birmingham Municipal Court and before the Jefferson County Personnel Board. The case was successful and the officers involved were fired by Chief G. L. Pattie, but were later re-hired by Mayor Jimmy Morgan over the objection of Public Safety Commissioner Robert Lindbergh. Pattie fired them again after a decision by the Personnel Board. The NAACP filed federal Civil Rights charges against the officers, but they were acquitted in the federal court. Lynch subsequently filed an unsuccessful lawsuit against the NAACP for damages.

In 1955 Patrick, his wife Rutha and four children moved to Los Angeles where he became a mail carrier. Two more children were born to the couple there. After retiring in the mid-1980s, Patrick and his wife returned to Birmingham. They are members of Harmony Street Baptist Church in Avondale.

In 2002 Patrick's youngest daughter Mignette began interviewing him about the case. The result was the 2010 book Speak Truth to Power: The Story of Charles Patrick, a Civil Rights Pioneer. In 2011 Patrick was honored for his bravery by the April 4 Foundation in Memphis, Tennessee.