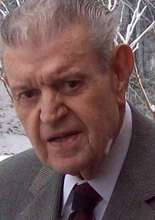 Charles C. Sutton (born c. 1924 in Ennis, Texas; died February 23, 2011 in Homewood) was the owner of American Termite and Pest Control and a long-time member of the Homewood City Council.

Sutton served as a Navy Chief in the South Pacific during World War II, with duty in the Solomon Islands and Guadalcanal. After the war he became an owner/operator for American Termite and Pest Control. He and his wife, Jeanne moved to Homewood in 1955.

In 1965 Sutton was elected to the first of several terms in the Homewood City Council. He served as Council Presendent for three years and left office in 1997. He was also a past-president of the Homewood Lions Club and a long-time member and usher at Dawson Memorial Baptist Church.

Sutton died in 2011 after a long illness and was survived by his wife, two sons, Robert and Kenneth, four grandchildren and five great-grandchildren. He is buried at Elmwood Cemetery.