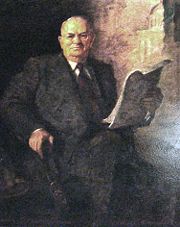 Sparks was born in Barbour County to George Washington and Sarah E. (Castello) Sparks. His father died while he was a child and his mother moved in with family in Quitman County, Georgia. Sparks grew up there and worked his way through Mercer University, completing a bachelor of arts in 1907 and a degree in law in 1910.

After graduating, Sparks returned to Barbour County to open a law practice in Eufaula. He was soon appointed to the bench by Governor Emmet O'Neal and presided over the Barbour County inferior court until 1915 when he resigned to go back into private practice. He served one term in the Alabama legislature from 1919 to 1923, and then returned to Eufaula as an attorney and farmer.

In 1930 Sparks made another successful bid for the legislature, becoming known as an opponent of tax proposals. He sponsored an amendment to limit salaries for state officials and argued for balanced state budgets, earning the nickname "The Barbour Bourbon".

Sparks made his first run for Governor in 1938, declining a runoff against Frank Dixon. His 1942 campaign received a boost from the death of front-runner Bibb Graves and he handily defeated Jim Folsom, Sr for the post.

Taking office during a booming wartime economy, Sparks surprised many by dedicating surplus revenues to educational and agricultural improvement programs rather than reducing property taxes. His administration doubled the state's financial contribution to public education, lengthening the school year from 7 to 8 months and expanding the Medical College of Alabama to a four-year program based in Birmingham. Other colleges also saw increased funding. Other programs which saw increased support during Spark's administration were farm experiment stations and the re-established Alabama Department of Labor. Even with the new expenditures the state's overall debt was reduced by 25% during his term.

Sparks agreed with the state's resistance to "federal encroachments", signing the Boswell Amendment which reduced black suffrage. His appointee to the position of assistant attorney general, fellow Barbour County native George Wallace, continued that policy. Wallace and Sparks both abstained, however, from participating in the 1948 Dixiecrat convention held in protest of liberal positions adopted by the Democratic National Committee.

Sparks' 1950 bid to return to the Governor's office was unsuccessful. He resumed his law practice in Eufaula, where he died in 1968. He is interred in that city's Fairview Cemetery. The Chauncey Sparks State Technical College in Eufaula is named in his honor.