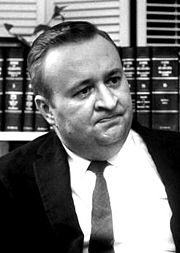 Charles Morgan Jr (born March 11, 1930 in Cincinnati, Ohio; died January 8, 2009 in Destin, Florida) was an attorney who became known for his work on Civil Rights cases, including the 1964 Supreme Court case which established the "one man, one vote" rule. He was driven out of Birmingham by anger over a speech which laid the blame for the deaths of four girls in the 1963 bombing of 16th Street Baptist Church at the feet of all those white citizens who did nothing to stop the course of hatred.

Morgan's family moved to Mountain Brook from Fort Thomas, Kentucky in 1945. He earned his undergraduate and law degrees at the University of Alabama and, while there, met and married the former Camille Walpole and later had one son, Charles III.

He began practicing and established an office in the Comer Building (later moving to the newly-opened Bank for Savings Building). Over time he became one of the few white lawyers willing to take on Civil Rights cases. As tensions mounted in the city, however, he lost white clients. In 1962 he and other white lawyers filed a suit against the State of Alabama to force reapportionment of the Alabama State Legislature. That case, Reynolds vs. Sims, reached the United States Supreme Court which ruled that the state must redraw its electoral districts in a manner more closely reflecting the "one man, one vote" ideal of popular democracy. The ruling increased the political power of urban voters and African Americans in Alabama, and in other states.

A day after the fatal bombing at 16th Street Baptist, Morgan delivered a speech to the Young Men's Business Club at the Redmont Hotel. In it he proclaimed that "every person in this community who has in any way contributed during the past several years to the popularity of hatred is at least as guilty, or more so, than the demented fool who threw that bomb." He concluded with the words "Birmingham is not a dying city. It is dead." The speech earned applause from the group and one member stood to move that the YMBC recruit a black member, but the motion died without a second. Unreported in the local press, Morgan's speech spread by rumor and eventually found its way into The New York Times, earning immediate rebukes from Birmingham residents.

After he and his family received death threats, Morgan moved to Atlanta, Georgia, where he established a Southern office of the American Civil Liberties Union. He elaborated on his condemnation of Birmingham in an article "I Saw a City Die", published in Look magazine on December 3 of that year. In 1964 Morgan published a book about his experience in Birmingham, entitled A Time to Speak.

On their behalf he appealed a case brought against the Georgia House of Representatives for refusing to seat Julian Bond (1966) and appealed Muhammad Ali's conviction for draft evasion (1967). Both appeals went to the Supreme Court.

In 1972 Morgan left Atlanta to become legislative director for the national ACLU office in Washington D.C. He led the group's efforts to force an impeachment of President Richard Nixon. He also represented Vietnam War protesters, including Army Captain Howard Levy, who refused to instruct a group of Green Berets whom he considered "killers of peasants and murderers of women and children". Levy was convicted of insubordination at a Court Martial and sentenced to three years in prison. In challenging the conviction, Morgan attempted the Nuremberg Defense, arguing that because of reported atrocities carried out by U.S. troops, soldiers could lawfully refuse orders pertaining to Vietnam service. The conviction was upheld and Levy served most of his sentence.

In 1976, while at a party in Washington, he called a New York liberal a "bigot" because he wouldn't consider voting for Jimmy Carter because of his Southern accent. The comment elicited a reprimand from ACLU executive director Aryeh Neier. Rather than apologize, Morgan resigned from the organization. He opened his own practice in 1977. His client list included Watergate figure John Mitchell, the Sears Roebuck Company (in defense of allegations of race and sex discrimination), and the Tobacco Institute (in its challenge of anti-smoking laws). He closed his law office in 1992 and retired to Destin, Florida.

In January 2009, Morgan died at home from complications from Alzheimer's disease. He was survived by his wife and son and four grandchildren. Chuck's Fish Restaurant in Tuscaloosa, owned by Charles III, was named for Morgan.