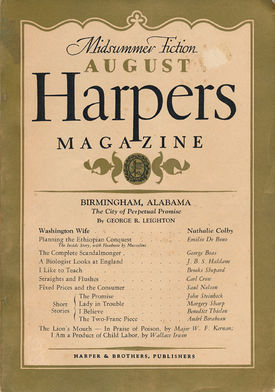 Cover of the August 1937 edition of Harper's

City of Perpetual Promise is an appellation which has been sometimes used to describe Birmingham. The "promise" refers principally to the mineral resources which many expected to to fuel the growth of the Birmingham District into one of the world's great industrial centers. The qualification refers both to the calculated retardation and suppression of that potential for the benefit of outside interests, and to the shortage of progressive local leaders capable of reversing such damaging exploitation.

The phrase was used as the subtitle of a detailed analysis of Birmingham's conditions undertaken by Harpers Magazine editor George Leighton and published in August 1937. It was reprinted in his book Five Cities in 1939.

Since then, the phrase has been recalled many times by critics of slow or retrograde progress in Birmingham, including former Mayor Larry Langford who, in a 2009 Birmingham News editrial, outlined steps he believed residents should take to create momentum for realizing the city's unfulfilled potential. At the 2010 Martin Luther King, Jr Unity Breakfast, speaker Ed LaMonte referenced Leighton's essay and identified the organized Civil Rights Movement of the 1960s as a key step in unlocking the area's potential.

On the other hand, activist Odessa Woolfolk has used Leighton's article to contrast the healthier climate for the exchange of ideas in today's city. Though the city still has far to go, she believes that it has largely caught up in step with the rest of the nation in dealing with problems that affect all Americans rather than just Birminghamians.