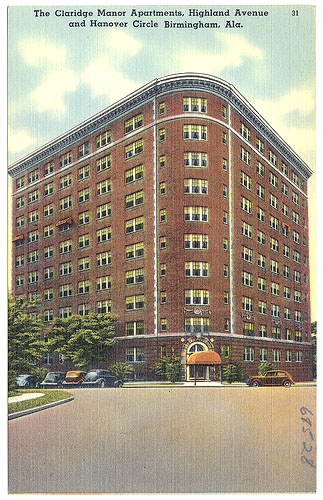 The project was developed by George B. Allen of Atlanta, Georgia and John D. Turner of Birmingham. Its Colonial Revival design, based on Atlanta's Pershing Point Apartments, was created by Atlanta architect W. H. Butterfield. The building was constructed for $750,000 by Gude & Company of Atlanta.

The luxury building included a formal communal dining room and basement servants quarters for the building's shared maid and valet service. Space was provided in the design for 60 automobiles. The lobby has a checkerboard marble floor. Apartments featured interior French doors with brass hardware. Eugene Lee was the first manager of the building.

Along with the Highland Plaza Apartments and Ridgely Apartments, Claridge Manor was one of the "Apartment Hotels in Birmingham, Alabama 1900-1930" listed on the National Register of Historic Places on May 17, 1984.