This article is about the natural feature. For the nearby settlement, see Falls City. 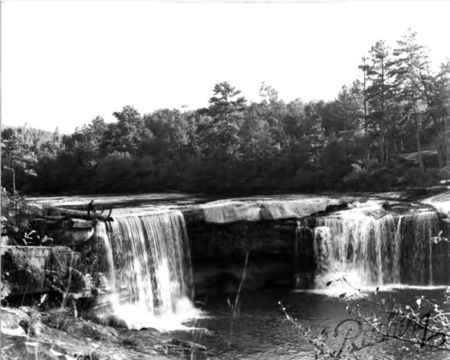 Clear Creek Falls was a large double waterfall, a natural feature of Clear Creek where it joined the Sipsey Fork in Winston County, north of Jasper. The waters of Clear Creek formerly rushed off of 42-foot and 38-foot tall sandstone ledges separated by a higher section of dry ledge.

About six hundred feet beyond the upper falls, another 37-foot drop completed the more than 80 foot descent into the deep gorge of the Sipsey Fork.

According to a family history, the falls were discovered in November 1812 by Jesse Livingston, who returned two years later to build a log cabin for his family. After a few years he moved to Lawrence County, but later returned and constructed an open-air grist mill at the spot. In his absence the cavern below the falls was reportedly used as a hideout by a gang of counterfeiters led by Tom Davis. He was captured there by a posse led by James Childress in 1820. Davis was convicted and hanged in 1822 and surviving examples of his craft are exhibited by the Shelby County Museum and Archives.

The area around the falls had supported a diverse habitat of Mountain laurel, Alabama azalea and Eastern hemlock. In the late 1950s, Alabama Power proposed damming the Sipsey Fork downstream from Clear Creek, creating a reservoir with its surface about 100 feet above the top of the falls.

The proposed dam was opposed by conservationists, including Howard College botanist Herbert McCullough and Blanche Dean of the Alabama Conservation Council. Nevertheless the plan was carried out and the falls disappeared beneath Smith Lake with the completion of Lewis Smith Dam in 1961.