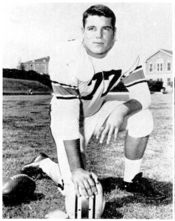 Wester grew up in Albany and played football at Albany High School. He was recruited by then-Auburn Tigers coach Shug Jordan even after a broken leg affected his ability. He played beyond his size for the Tigers and was voted most valuable player in 1958. He was drafted that year in the 22nd round by the New York Giants but accepted a more generous offer from the CFL's Toronto Argonauts. He later played a season with the Boston Patriots.

After retiring from football Wester opened a successful tire business in Albany. He continued to be an active Auburn booster and volunteered as a coach at his sons' high school. He led a grassroots campaign to get Auburn to hire Pat Dye from East Carolina and helped Auburn's coaching staffs recruit generations of players from South Georgia.

Wester was inducted into the Georgia Sports Hall of Fame in 1994. The Southwest Georgia Auburn Club endowed a scholarship in Wester's name in February 2009. He died six months later after a relapse of prostate cancer. He was survived by his wife, Elizabeth, six children and nine grandchildren.