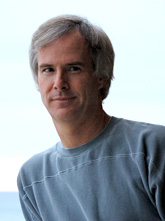 Colin M. Coyne (born c. 1962 in Parkersburg, West Virginia) is president of The Coyne Group, a business strategy consulting firm. He was previously an executive with Melaver, which had proposed a high-rise development surrounding the Federal Reserve Building in downtown Birmingham and the owner of CMC Group, which developed the WaterMark Place outlet mall near VisionLand on behalf of the West Jefferson Amusement and Public Park Authority.

Coyne earned his undergraduate degree in economics and business administration at Vanderbilt University in 1983 and a master's in management at Northwestern University's J. L. Kellogg Graduate School of Management in 1985.

Coyne pursued a career in retail center marketing and management with Factory Merchants Malls of Los Angeles, California and Tanger Outlets in Greensboro, North Carolina. He left Tanger in 1995 to open his own firm to develop and lease outlet centers.

Coyne met with Fairfield mayor and VisionLand authority chairman Larry Langford in 1998 to strike a deal for development of what was then called the VisionLand Outlet Center. He agreed to a $1 per year lease on the land and a 4% surcharge on gross receipts to the authority. He interested numerous upscale outlets for the center and secured financing from Colonial Bank for the project. When signed leases were slow in coming, Colonial backed out of the deal, causing a stop in construction. Wachovia Bank stepped in to provide financing and the mall eventually opened with 28 stores and crowds of customers in November 2000.

During development of WaterMark Place, Coyne moved his company and residence to western Jefferson County. In 2006 the Savannah, Georgia-based Melaver Inc. announced plans for an office, hotel and retail development, dubbed the Federal Reserve Tower, centered on the historic Federal Reserve branch office on 5th Avenue North. Coyne served as Melaver's chief operating officer during the project's development and opened a local office for Melaver. The $40 million to $113 million project never secured financing and Melaver closed its Birmingham office in 2008.

Coyne decided to remain in Birmingham and founded the The Coyne Group with an initial goal of resurrecting the project. The company has since evolved into a consulting firm, offering services which include sustainability and marketing strategies to companies, trade groups and local governments.

In 2011 Coyne entered the winning entry in the Community Foundation of Greater Birmingham's "Prize2theFuture" contest to generate ideas for developing Block 113C adjacent to the newly-opened Railroad Park. Coyne's entry, entitled "One Birmingham Place", included a computer lab, an academic center for the responsible use of social media, a shared suite of offices for community organizations, a facility for Red Mountain Theatre, and a pocket park. In addition to awarding Coyne a $50,000 cash prize, the Community Foundation pledged to spend up to $1 million from its Community Catalyst Funds to spur implementation of his idea.

Coyne is chair of the board of trustees for the Vestavia Hills Public Library and serves on boards and committees for the Cahaba River Society, Red Mountain Theater, the Birmingham Business Journal and the Green Resource Center of Alabama. He was a member of the 2007 class of Leadership Birmingham and was named "Green Advocate of the Year" by the Business Journal in 2009.

Coyne and his wife, Lesley, have two daughters.