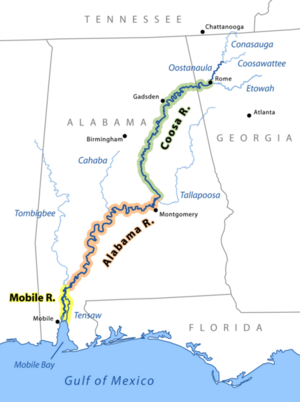 The Coosa River is the major tributary when it joins the Tallapoosa River near Wetumpka, Alabama to form the Alabama River.

The Coosa River is one of Alabama's most developed rivers. It begins at the confluence of the Oostanaula and Etowah Rivers in Rome, Georgia. Around 90% of the Coosa River's length is located in Alabama. The river starts in Rome and ends just northeast of the Alabama state capital, Montgomery, where it joins the Tallapoosa River to form the Alabama River just south of Wetumpka.

There are a total of seven dams between Georgia and the Coosa’s confluence with the Tallapoosa River which impound the Coosa River's natural flow for almost its entire length in Alabama. Hydroelectric power dams have proved very valuable to the citizens of Alabama, but costly to some species endemic to the mainstem of the Coosa River. In Alabama itself, most of the river has been impounded, with Alabama Power, a unit of the Southern Company, maintaining seven power dams on the Coosa River to this day.

The Coosa serves as the de facto eastern border for the metropolitan Birmingham area, creating the eastern boundaries for St Clair, Shelby, and Chilton Counties.

Native Americans had been living on the Coosa Valley for millennia before Hernando de Soto and his men became the first Europeans to document the region in 1540. De Soto enslaved, raped, and murdered thousands of people from the native tribes. Taking local chieftains hostage, he demanded food, skins, trade goods, concubines, guides and bearers to accompany them as they moved across the Southeast. The Coosa chiefdom was one of the most powerful chiefdoms in the southeast at the time. The natives were not pleased with the manner in which de Soto ravaged their land, leading the regional chief, Tascaluza, to stage an attack on De Soto and his men in Mauvila. Although the battle was won by the Spanish, De Soto lost his accumulated goods and moved northwest in search of easier plunder. The toll on the tribes was far greater, with disease transmitted from the Spanish men and pigs killing off many who survived the battle. The Coosa tribes later organized under the Choctaw nation.

Over a century after the Spanish left the Coosa Valley, the British established heavy trading ties with the tribes around the late 17th century, much to the dismay of France. The French believed that the Coosa River was a key gateway to the entire South and they earnestly wanted to control the valley, since the main transportation of the day was by boat. The convergence of the Coosa and Tallapoosa Rivers was the gateway to Mobile Bay, which was where the French docked coming and going from their home countries.

In the 18th century, almost all trade European and Indian trade in the southeast ceased during the tribal uprisings brought on by the Yamasee War against the Carolinas. After a few years, the Indian trade system was resumed under somewhat reformed policies. The conflict between the French and English over the Coosa Valley, and much of the southeast in general, continued. It wasn't until the Treaty of Paris was signed in 1763, ending the French and Indian War, that France relinquished its holdings east of the Mississippi River.

After the United States won its independence, the Coosa Valley was home to the Creeks and the Cherokee. After the Fort Mims massacre, General Andrew Jackson led American troops, along with Cheroke allies, against the Creeks in the Creek War, which culminated in the Creek defeat at the Battle of Horseshoe Bend. Afterwards, the Treaty of Fort Jackson in 1814 forced the cession of a large amount of land from the Creeks, but left them a reserve between the Coosa and Tallapoosa Rivers. Even there the Creeks were edged out by white settlers who had begun moving into the places which were not included in the nation. Finally, during the 1820s and 1830s the Creeks, Cherokee, and virtually all the southeastern Indians were removed to present-day Oklahoma. The Cherokee removal is remembered as the Trail of Tears. The Cherokee capital city of New Echota was located on the headwater tributaries of the Coosa River, in Georgia, until the Cherokee removal. The Creek and Choctaw removals were similar to the Cherokee Trail of Tears. After the removals, the Coosa River valley and the southeast in general was wide open for American settlers. This, in conjunction with new cotton hybrids that could be grown inland, resulted in large-scale migrations known as "Alabama Fever".

The first river town to form in the Coosa Basin was at the foot of the last water falls on the Coosa River, the Devil’s Staircase, with the town name Wetumpka (or "falling stream") adopted shortly thereafter.

The Coosa River played an important role into the early 20th century as a commercial waterway for riverboats along the upper section of the river for 200 miles south of Rome. However, shoals and waterfalls such the Devil's Staircase along the river's lowest 65 miles blocked the upper Coosa's riverboats from access to the Alabama River and the Gulf of Mexico.

The building of the dams on the Coosa--Lay, Mitchell and Jordan--allowed Alabama Power to pioneer new methods of controlling and eliminating malaria which was a major health issue in rural Alabama in the early 1900's. So successful were their pioneering efforts in this area, that the Medical Division of the League of Nations visited Alabama to study the new methods during the construction of Mitchell Dam.

The Popeye The Sailorman cartoons were inspired by Coosa River riverboat life and characters of the early 1900s in Rome, Georgia.[1]