Cordova is a city of 2,035 on 5.9 square miles near the banks of the Mulberry Fork in Walker County. The city is governed by a Mayor (Jack Scott) and 7-member Cordova City Council. Cordova City Hall is located at 74 Main Street. Cordova's ZIP code is 35550.

The community was first settled around 1822 and was originally called "Dent" or "Dent's Place". Captain Benjamin Long renamed the settlement in 1859 for Córdoba, Mexico, where he had been stationed during the Mexican War. He opened a mercantile in the community and took charge of recruiting other businesses. The Nashua Manufacturing Company of New Hampshire built the Indian Head Textile Mills in Cordova in 1890, boosting its population as families came to the town for employment. The company constructed housing for its workers and provided many other facilities common to mill towns, including the Indian Head School (now the site of the Cordova Health and Rehabilitation Center). The Burlington Northern & Santa Fe and Norfolk Southern Railway subsequently connected Cordova to the outside world. 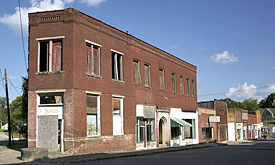 The closing of the mill in the 1950s diminished the town's prospects, with hopes pinned on new development following the completion of I-22 through the county. Currently, Cordova's major employer is the military contractor BAE Systems.

As of the census of 2010, there were 2,095 people residing in the city's 842 occupied housing units, for an average household of 2.5 persons. The population density was 349.0 people per square mile, with housing units at an average density of 173.4 per square mile. The racial makeup of the city was 83.4% white and 14.5% African American, with 0.7% of the population (15 people) Hispanic or Latino of any race.