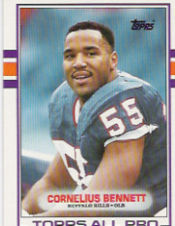 Bennett played halfback and several other positions while playing at Ensley High School in Birmingham. Bennett was an excellent basketball and baseball player during his high school career. Bennett was an all-state performer in his senior year, amasing over 1000 yards while carring the ball 101 times. Bennett was nicknamed "Biscuit" due his strong appetite for his mothers homemade biscuits.

Before his NFL career, Bennett played for the University of Alabama from 1983-1986. Bennett was a first selection on the College Football All-America Team 3 times (1984-1986). As a senior, he won the Lombardi Award, SEC Player of the Year honors, and finished 7th in balloting for the Heisman Trophy. In his 4 seasons there, Bennett recorded 287 tackles, 21.5 sacks, and 3 fumble recoveries. His most famous sack was in 1986 when he leveled Notre Dame quarterback Steve Beuerlein. In 2005, Bennett was elected to the College Football Hall of Fame. After his college career, he was selected by the Colts with the second pick of the 1987 NFL Draft.

Bennett and the Colts were unable to come to an agreement on a contract. Bennett was then dealt to the Bills from the Colts in a three way trade that also included Los Angeles Rams running back Eric Dickerson, and Bills running back Greg Bell. This trade occurred in the fall of the 1987 season, right before the trade deadline. Trades of this magnitude are very rare in recent years in the NFL.

In the NFL, Bennett's talent at the linebacker position helped the teams he played for teams to 5 Super Bowl appearances (4 with Buffalo and 1 with Atlanta), but they lost them all. In his 14 NFL seasons, he recorded 71 sacks, 7 interceptions, 112 return yards, 27 fumble recoveries, 78 fumble return yards, and 2 touchdowns (1 interception and one fumble return).

At the time of his retirement, his 26 defensive fumble recoveries were the third most in NFL history.