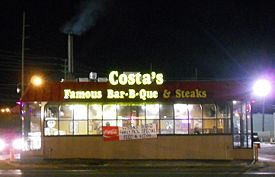 Costa's Famous Bar-B-Que is a local chain of barbecue restaurants.

The orignal restaurant is at 613 Old Springville Road in Huffman in a former H. Salt Fish & Chips location. It was founded in 1981 by Gus and Maria Kanellis. The business was bought by Ray and Rick Pate in 2003. The Kanellis' chose the name "Costa" as it means "Gus" in Greek.

In 2005, the Pates opened two more locations. A large restaurant with a sports bar was opened in Trussville in the the Colonial Promenade. A smaller, "drive-thru only" restaurant was opened in Wildwood at 15 Lakeshore Parkway in a former Hot-N-Now location.

The Huffman and Trussville locations merged operations in September, 2008, and the Huffman location was closed. The Trussville location closed in mid-2009 and the Huffman location, which had been converted into a chicken wing restaurant, was renovated and reopened on January 1, 2010. The day after the store re-opened a motorist suffered an apparent seizure at the intersection and crashed into the restaurant's parking lot, colliding with Rick Pate's BMW Z3 and damaging the drive-through menu and the exterior of the building. A location in Tuscaloosa was opened later in 2010 on Skyland Boulevard.

Other locations have included 2201 4th Place West near Finley Avenue, and Lorna Road in Hoover. The Finley Avenue location opened in 1983 and was sold to a friend of the Kanellis' in 2000. The Hoover location was converted to Costa's New South Cafe in 1994, which in turn became Costa's Mediterranean Cafe in 1995.