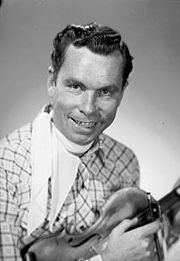 Burns, one of eight children raised on his family's 200-acre Blount County farm, had determined to work in radio since he was a 10-year-old listening to Curley Fox on the Grand Ole Opry. At 13 he bought a fiddle with money he raised selling Garden Spot Seeds door to door. He taught himself to play the fiddle contacted Happy Hal Burns' about the prospect of appearing on his radio program. Burns (no relation) gave him the nickname "Country Boy". He was able to join Happy Hal's band on WBRC-AM's "Crossroads Variety Show" in 1946.

During the Korean War, Burns served with a psychological warfare unit which had been assigned to play Chinese folk music over loudspeakers at the front lines. According to his account, one day the phonograph couldn't be made to work and so he had an opportunity to play his fiddle, which resulted in an immediate artillery shelling. Burns sang on the Armed Forces Radio Network in Korea, Japan and Hawaii. He returned home to Happy Hal's band, touring for a few years and making appearances on shows like "Hillbilly Bandstand". Eventually he caught the ear of Bill Monroe, and was invited to make his own appearances on the Grand Ole Opry program.

Burns soon married and settled in Birmingham. He took a job as a disc jockey for program director Warren Musgrove at WILD-AM. In a staged stunt, Musgrove "fired" him for bringing a mule into the studio, and Burns rode out and proceeded as far as Alabaster. Besides WILD, Burns also worked for WLBS-AM and WLPH-AM. In addition he appeared at as many as 500 live performances per year and operated a water park, Waterfalls USA near his cattle ranch in Blount County. 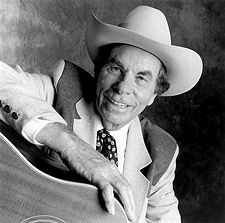 In 1955 Burns got Eddie Wright of Big Hearted Eddie's Used Cars to sponsor a midnight program after Saturday night wrestling on WAPI-TV (Channel 13). He put together his own band. Two years later, he was invited to bring the band as house musicians for the Tom York Morning Show on WBRC-TV. In February 1957 the morning "Country Boy Eddie Show" was spun off into its own one-hour slot, which was later expanded to two hours, every weekday from 5:00 to 7:00 AM.

The show proved popular and was rebroadcast by as many as 100 station across the South. On Mondays and Tuesdays in 1961 and 1962 Burns drove to Tennessee to tape a week's worth of morning shows for a Nashville station. He introduced a young Dolly Parton to audiences there, and also had Pat Boone and Eddy Arnold on the show.

Burns' homespun amiability became a familiar part of the morning for many Birminghamians, and was syndicated around the region by as many as 120 cable channels. The show endured for 38 years. Burns retired after the December 31, 1993 broadcast.

In retirement, Burns continued to make public appearances. Until her death in 2016 he lived with his wife, Edwina, on a 200-acre farm in Blount County. They attended Pineywood Baptist Church in Gardendale and had one son, Doyle, and three grandchildren.

Burns was given the 2001 Media Award from the Alabama Music Hall of Fame.