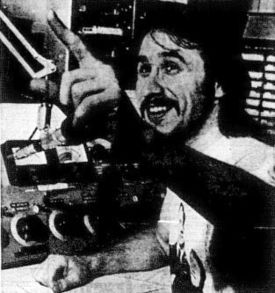 Battan began as a DJ for WKDA-AM in Nashville while still in high school, and joined the staff full time when its sister station, WKDA-FM launched in 1970. He moved to Pensacola, Florida in 1973 to work for WBSR-AM.

Battan next moved to WERC-AM in Birmingham and adopted the name "Cayote J. Calhoun" as he took over the slot previously held by Chris "Superfoxx" Foxx. He became one of the city's most popular disc jockeys, winning celebrity with stunts such as faking his on-air murder or wrestling a black bear. He resigned in 1979 to move to Los Angeles as an aspiring stand-up comic. He joined an improv group called "The L.A. Connection" and also immersed himself in the west coast's New Wave music scene.

After hearing what was being played on radio stations in LA, by 1983 Battan was back in Alabama and back on the air. He brought new wave music to Mobile, then New Orleans, and wound up back in Birmingham. He returned to radio in 1981 at KPRI-FM in San Diego, California. He returned to Birmingham, by way of Denver, Colorado, in 1983 and brought the New Wave sound to "95 Rock", WAPI-FM. He was transferred a year later to Dittman Broadcasting's flagship WABB-FM in Mobile.

From 1985 to 1986, Calhoun worked the 7-midnight show for WQUE-FM in New Orleans, Louisiana. He added more gothic and industrial singles into his mix, adopting the name "The Edge," but he was let go when Q-93 switched to an "urban" format.

In the spring of 1987 Calhoun returned to Birmingham once more, hosting "The Edge" on WZBQ-FM (Z-102). Another on-air stunt landed him a suspension, and he left the station for good in 1989. Later that spring, I-95 operations manager Randy Lane tapped Calhoun, along with Andy Spinosi and Trey Matthews, as partners in the "Morning Wake Up Service," filling the void left by the departure of Mark and Brian. The program was not renewed after 1992.

Calhoun's own Sunday evening show, "The Edge," flourished and was picked up for syndication across Alabama. Meanwhile, he continued working with Spinosi on Frank Cummings' parody magazine JAB. In 1995 Calhoun was hired as part of the original on-air staff for the alternative format WRAX-FM, and remained through its demise in December 2006. He also contributed music reviews to Birmingham Weekly from 1998 to 2002.

In January 2007 "The Edge" returned to the air with a "post-modern alternative" format on Citadel's WZRR-FM "Rock 99.5". On September 13, 2008, Calhoun hosted "Edgefest 2008" at Matthew's Bar & Grill on Morris Avenue to celebrate 20 years of the program. He retired the show in early 2009, then returned as a classic rock deejay in February.

On February 14, 2010, Calhoun left radio and worked as a co-producer on the third album from German dark wave band Feeding Fingers which posted three singles on the European charts. He also co-produced three tracks on the band's 2013 follow-up "The Occupant".

Calhoun revived "The Edge" as an around-the-clock internet radio station on October 19, 2013.

Battan and his wife, Vicki, have two grown sons.