This article is about the former mayor. For other uses, see Culpepper Exum (disambiguation). 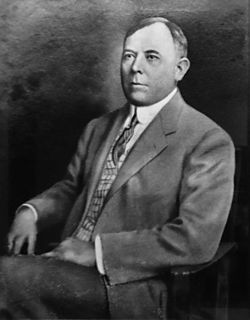 Culpepper E. Exum Sr (born June 19, 1866 in Marion County, South Carolina, died March 14, 1920) was a founder and president of the Birmingham Fertilizer Company and the 15th Mayor of Birmingham. His term of office spanned the city's change from a Mayor-Aldermen form of government to a City Commission.

Culpepper was the tenth of eleven children born to Robert Benjamin and Mary Jane Culpepper Exum of Marion County (now Florence County), South Carolina. He spent his childhood on the family farm and, at around the age of 10, accompanied his father to Scranton and Charleston, South Carolina, where he attended public schools.

Exum completed high school at Oak Ridge in Guilford County, North Carolina, boarding at the home of James Browning. He went to work as a clerk at a variety of businesses, including a brokerage of naval stores, a cotton factor, and wholesale grocery house. He and a brother opened a country store in Orangeburg County, but Culpepper soon left to become a traveling salesman for a Baltimore grocery wholesaler, and then a clerk for a Charleston clothing store.

Later, while working as a salesman for a wholesale clothing company, he had the opportunity to learn about the owner's other enterprise, a fertilizer factory. Convinced of the potential for that industry, he began representing the Chicora Fertilizing Company in Alabama and Georgia.

In 1897 Exum and fellow Chicora salesman Frank Burbridge relocated to Birmingham where they opened their own Birmingham Fertilizer Company. The business was an immediate success and Burbridge left to start another similar firm in Charleston, with Exum as a major shareholder. Meanwhile, Exum's investments also expanded in Birmingham. He became a director of the First National Bank of Birmingham and owned the real estate on which the Alabama State Fairgrounds was developed. In 1904 he was elected president of the Birmingham Chamber of Commerce. He also served a one-year term as president of the Birmingham Country Club.

As director of the Alabama State Fair Association, he offered the Fair Grounds as a location to display the Vulcan statue after the culmination of the St Louis World's Fair. In 1905 Exum married the former Lestra Kinney. The couple had four children: Lestra Kinney, Culpepper Jr, Frank Kinney and Jane. The family lived at a large home at 2913 Highland Avenue.

Exum was elected Mayor of Birmingham on June 29, 1910 to fill the vacancy left by the death of Frank O'Brien. He was sworn in by Judge Charles Furguson on October 22 and delivered a brief inaugural address. Shortly thereafter a citizen-led legislative change created a Birmingham City Commission to replace the Board of Aldermen. Exum remained in office as President of the Commission until November 1913.

Exum served alongside A. O. Lane and James Weatherly on the Commission, which was charged with bringing a "businesslike" competency to City Hall. In order to reign in expenditures and cover a deficit of $583,144 the commissioners abolished several offices and reduced or eliminated certain inefficient city services, including a temporary abolishment of the Department of Parks. They also renegotiated interest payments on the city's deposits by changing banks. The task of consolidating utilities and services provided by the numerous municipalities annexed into the city by the Greater Birmingham act was the primary task of Exum's administration.

While in office, Exum organized the Steel Cities Chemical Company. The company's plant near Ensley, which manufactured sulfuric acid used in munitions during World War I, was destroyed by fire on May 19, 1918. Exum had profited from the 1915 sale of the Jefferson Powder Company, in which he was a major stockholder.

In 1916 Atlanta detectives recovered a $200 Swiss watch that had been stolen from Exum by A. P. Chandler and pawned in that city for $8. In 1917 Exum made a journey by motor car to New York City. On his return he visited his former high school in Oak Ridge, North Carolina and later made a gift of $300 for its library.

Exum died in March 1920. The cause of death was reported as "heart failure following a protracted illness and superinduced by a recent attack of influenza." Birmingham City Hall and all municipal department closed at 1:00 PM on the day of his funeral, and a resolution requesting all places of business to close for five minutes was issued by the City Commission. He was buried at Elmwood Cemetery.