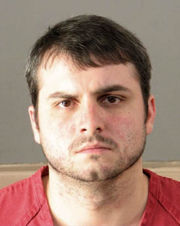 Curtis Jeffrey Thornton (born c. 1985) is a former Birmingham Police Department officer who was convicted in 2013 of setting fires in six vacant structures in April and May 2012.

Thornton was hired by the Birmingham Police on August 3, 2009. He moved to Warrior from Tuscaloosa after his home was damaged in the April 2011 tornado outbreak.

He and his children lived with his fiancée, Bobbie Mayfield, in a house in the Dana Road area of Warrior. During April and May a total of 14 suspicious fires damaged homes in Warrior and western Birmingham. Thornton bragged to Mayfield of setting fires in houses he believed were being used by drug dealers near his workplace at the West Precinct in Ensley. In two of those arsons, fellow officer Jason Arnold and a third man, Anthony Weaver were also indicted.

Thornton was also accused of setting fires in vacant houses near his home, two of which were owned by his prospective father-in-law, Godfrey Chryssoverges. His wife testified that he had also attempted to set fire to their own home by lighting a stack of Thrifty Nickel newspapers in the crawlspace.

Thornton was fired in December 2012. He was found guilty in Clyde Jones' court in June 2013 and was given a 10-year and four 20-year sentences, to run concurrently.

During the arson investigation, police also discovered alleged pornographic materials depicting minors on Thornton's computer and he was charged separately for that crime.