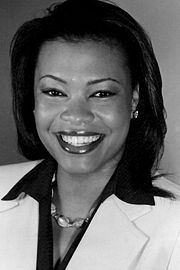 Cyrondys Jackson (born February 8, 1977) is a student recruiter for Lawson State Community College, the founder of TV Latino, and a former television and radio reporter.

Jackson, the daughter of Ron Jackson, graduated from Huffman High School in 1995 and earned her bachelor of arts in broadcast journalism and public relations with an English minor at Miles College in 2004. Since 2001 she worked as a reporter and talk show host for Cox Radio in Birmingham, appearing on WBHJ-FM, WAGG-AM and WPSB-AM. She hosted the "Takin’ it to the Streets" talk show and co-hosted "Talkback" with Reginald Greene on WBHK-FM (98.7 KISS FM). In 2006 she was hired as a reporter and assignment editor for ABC 33/40. She has been working at Lawson State since 2004.

In 2010 Jackson became one of 14 candidates to qualify for a special election to fill the Jefferson County Commission District 1 seat left vacant when William Bell became Mayor of Birmingham.