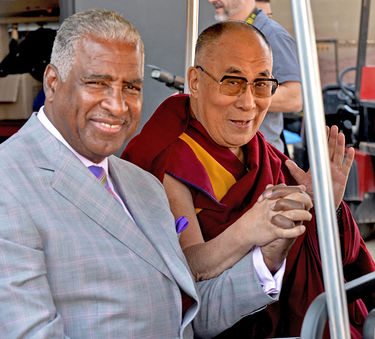 The 14th Dalai Lama (Tenzin Gyatso, born Lhamo Döndrub July 6, 1935 in Taktser, Amdo, Tibet) is the head monk of the Gelug school of Tibetan Buddhism, the political body which governed Tibet prior to the country being claimed by the People's Republic of China. He is also an internationally-recognized spiritual leader and was awarded the Nobel Prize for Peace in 1989. He made his first visit to Birmingham as part of Human Rights Week in October 2014.

As a two-year old, Lhamo Döndrub was recognized as the reincarnation of the 13th Dalai Lama, who had died in December 1933. He was given the honorary name of "Jetsun Jamphel Ngawang Lobsang Yeshe Tenzin Gyatso" (translated as "Holy Lord, Gentle Glory, Compassionate, Defender of the Faith, Ocean of Wisdom") and was educated by a series of tutors, including Austrian mountaineer Heinrich Harrar.

Tenzin Gyatso assumed the title of head monk at the age of 15 in November 1950. He participated in political negotiations with the communist leaders of China and was a signatory to the 1954 agreement upon which China's claims of sovereignty over the region are based. He has consistently identified himself as a socialist and served as deputy chairman of the Standing Committee of the National People's Congress for 10 years.

The Dalai Lama was awarded the Lharampa degree in Buddhist philosophy from the Jokhang Temple in Lhasa in 1959. Shortly afterward, a popular uprising brought about China's military annexation of Tibet. The Dalai Lama was among the 80,000 Tibetans who fled the country and, with assistance from the United States' Central Intelligence Agency, he established a Central Tibetan Administration in exile from Dharamshala, India. The administration has endeavored to preserve the culture and language of Tibet through the establishment of religious, educational and cultural institutions. In addition, the Dalai Lama appealed personally to the United Nations for protection for the Tibetan people, resulting in three resolutions urging China to respect the Tibetans' human rights. The Central Tibetan Administration's own constitution, drafted in 1963, is closely modeled on the UN's Universal Declaration of Human Rights. In 1988 the Dalai Lama proposed pursuing a cooperative agreement with China to create a demilitarized, self-governing Tibet under the umbrella of Chinese sovereignty, but his own government rejected the plan. Sino-Tibetan tensions continued to escalate into violence in 2008. Though advocating for peaceful reconciliaton, the Dalai Lama has admitted to losing faith in the possibility of negotiating with the Chinese government. He retired from the Central Tibetan Authority in 2011.

The Dalai Lama is a respected teacher of the "Dzogchen" practice of meditation toward spiritual enlightenment. He is a popular figure worldwide and travels frequently to promote the principles of Tibetan Buddhism, especially advocating for individual compassion and love as the most effective means of addressing social and political problems. In particular, with respect to disagreements between religious sects, he espouses the commonality of religious teaching. He has also suggested that scientific discovery can lead people to common understanding, even at the expense of long-standing doctrines. Within his own school, practitioners of Dorje Shugden have claimed that the Dalai Lama allows persecution of their beliefs.

The 15th Dalai Lama has authored several books on spirituality, as well as a 1990 autobiography and a 1998 book, "The Art of Happiness", which was a worldwide best-seller. With regard to his own succession, the Dalai Lama has indicated that he expects the position not to continue past his own death. Chinese leaders have announced plans to name their own successor. 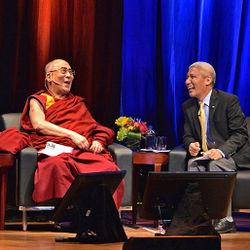 The Dalai Lama at the "Neuroplasticity and Healing" forum at UAB

The 14th Dalai Lama made a four-day visit to Birmingham in October 2014 as part of a Birmingham Human Rights Week program organized by the City of Birmingham.

In advance of the Dalai Lama's visit, a group of monks from Atlanta's Drepung Loseling Monastery created a sand mandala in a temporarily-enclosed space at Railroad Park. The Avalokiteshvara mandala, honoring the Buddha of compassion, was created over a five-day span. It was swept away on October 27, after the departure of the Dalai Lama.

The Dalai Lama arrived at Birmingham-Shuttlesworth International Airport on Friday, October 24 and was housed at the Westin Birmingham during his visit.

On Saturday October 25 he participated in a "Neuroplasticity and Healing" forum at UAB's Alys Stephens Center. The symposium, moderated by Norman Doidge, featured presentations by behavioral neuroscientist Edward Taub of the Taub Training Clinic and Michael Merzenich from the University of California, San Francisco.

That afternoon he visited the Civil Rights District and toured 16th Street Baptist Church with Reverend Arthur Price. He spoke to the press from the church's sanctuary, taking a a pew in the rear of the church and holding the hand of Birmingham mayor William Bell. He urged Bell and President Obama to provide leadership in overcoming violence by addressing social, economic and educational inequality and encouraging people to seek a peaceful attitude in their hearts which can spread outward to society at large.

On Sunday, October 26, before leaving the Westin, the Dalai Lama addressed a group of about 350 followers and supporters who gathered to greet him. He encouraged Tibetans living in the west to pursue educational opportunities and to act in the common good. He predicted that China would become a more open society as another generation came into power.

Later that morning he was a featured guest at a moderated panel discussion entitled "Beyond Belief" at the Alabama Theatre. Bob Selman moderated the discussion, which included Khalid Latif, director of the Islamic Center at New York University; Shmuley Boteach, an Orthodox rabbi and author; Eric Andrews, President of Paulist Productions, a Catholic media company; Carl Jeffrey Wright, president of Urban Ministries in Chicago, Illinois; Serene Jones, president of the Union Theological Seminary in New York.

The panel referred to the issue of waiting for justice from Martin Luther King, Jr's "Letter from Birmingham Jail". The Dalai Lama distinguished short term and long term goals and emphasized the role of being truthful and honest to engender support for moral causes. He also called for schools to find ways to teach inner values such as compassion instead of only material values, even when those teachings must be secular. In another discussion, he stated that the idea of a single religious truth is acceptable on an individual level, but as a global society, we must have room for multiple systems of belief and take comfort in the universality of the value of love, compassion and forgiveness. Closing comments were made by Mayor William Bell, Jonathan Miller of Temple Emanu-El and Ashfaque Taufique of the Birmingham Islamic Society.

That afternoon, the Dalai Lama delivered a public address entitled "Secular Ethics in our Time" at Regions Field. In his speech, he described three of his own commitments: to view all people as brothers and sisters, to promote harmonious relationships with all groups, and to use our common sense, common experience, and scientific pursuits to promote happiness and common well-being. As an example, he observed that we should all be able to agree that affectionate environments are better for children than anxious, fearful environments.

He also challenged the present generation to bring the world into a time of peace through global dialog. When asked by Bell about the influence of Martin Luther King, Jr, the Dalai Lama responded that King's spirit is still alive and still needed as different communities address discrimination. When asked about gun control, he tapped his chest and urged that individuals must control their own tendencies toward violence, but also hoped that those profiting from sales of weapons would consider the damage they inflict on the world.

The afternoon program also included chanting by the Drepung Loseling monks and a performance by the Alabama Symphony Orchestra, but due to miscommunication, most of the audience left after the Dalai Lama's speech and before the performances took place.

Groups of supporters and protesters congregated in Birmingham during the Dalai Lama's visit. One protester interrupted the panel discussion at the Alabama Theatre and was escorted out of the venue.