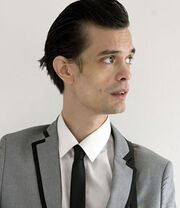 Daniel Fredrick Sartain (born August 13, 1981 in Birmingham; died March 19, 2021) was a rock and blues singer and guitarist. He performed with Plate Six in the 1990s, and has toured as a solo artist since then, notably opening for the White Stripes and the Hives.

Sartain grew up in the Fairfield area, but his family moved to Center Point when he was 10, and later to Bluff Park. He graduated from Erwin High School. He wrote songs throughout his teenage years while working as a gas station, delivering pizzas and attending barber college. He was heavily influenced by the Ramones, and later by Ricky Nelson, and Rocket from the Crypt, whose records his brother had brought back from San Diego. At a show, Sartain passed them some of his home recordings and was invited to come record with them for Swami Records.

In 2018, after the death of Vincent Oliver, Sartain took up the lease on the Hippodrome Barber Shop with the intent to preserve its character. He partnered with Bud Genry to operate it as Genry's Barber Shop until he secured a license from the Alabama Board of Cosmetology and Barbering, and then began operating it himself as Dan Sartain's Barber Shop. The business was closed during lockdowns required to address the 2020 Coronavirus pandemic. Sartain reopened on an appointment basis and for walk-ins on an irregular schedule.

Sartain died in March 2021. He was survived by his parents and his brother, Rob; as well as by his partner and their daughter.