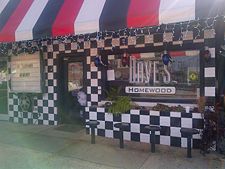 The restaurant closed after the death of Morrison in an apparent murder-suicide carried out by him in December 2012. The restaurant re-opened in January 2013.