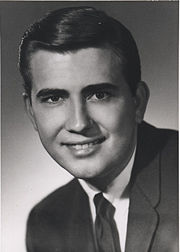 David Marshall Ruddle, called Rockin' Dave Roddy (born March 25, 1940 in Memphis, Tennessee; died February 12, 2022 in Irmo, South Carolina) was a former radio deejay and music director for WSGN AM 610. During the 1960s he was one of the station's "Good Guys" that included Walt Williams, Jim Kell, and Glen Powers. He also organized lead-outs for high school clubs and promoted large concerts and sock hops.

Ruddle, the son of Otis Marshall and Erma Henderson Ruddle of Memphis began working in radio in 1958 with a midnight to 6:00 AM show on Knoxville's WKGN before moving to WWOK in Charlotte, North Carolina.

Roddy came to Birmingham in 1960 to work at WYDE-AM, where his former band-mate Jay Cook was outgoing program director. He worked for general manager Tom Whitley and program director George Singer, who changed his on-air handle from "Ken Keene" to "Rockin' Roddy" and posted him in the station's drive-through request window. (Ken Tremmelling adopted the "Ken Keene" moniker.) With guidance from Pete Schiro, he pioneered a "beach music", heavier with rhythm & blues than the typical pop played on other programs. He ended the show with 30 minutes of love songs before midnight curfew, signing off with a snippet of "Lover's Never Say Goodbye". The formula was a big hit with younger listeners and helped the smaller station pull an audience from the bigger WSGN and WVOK pop stations. His promotional stunts included a "HalloWYDE" event in which he broadcast on Halloween from an open casket in the station's front lawn, wrapped up like a mummy. Another marketing campaign, involving orange tennis ball antenna toppers, was widely copied.

When WYDE secured the rights to Birmingham Barons broadcasts in 1961, Roddy moved to WSGN, replacing Tommy Charles. His first meeting with general manager Ben McKinnon was arranged by Ward McIntyre. Program director Bill Bolen placed him in charge of compiling the stations Top 20 survey. Roddy took pride in applying his sense for hits to keep the list ahead of record sales and requests. Soon Bolen's replacement assumed control of selecting music. Duke Rumore rebelled and control was eventually returned to the disc jockeys. Roddy's program evolved to include more "oldies" (most often less than 5 years old). Those tracks were featured in his 6:00-7:00 "Classic Hour".

In 1962 Roddy organized a Kappa Theta Phi event with Benny Spellman, Arthur Alexander and Irma Thomas, with Johnny Jenkins and the Pinetoppers as the backing band. Pinetopper vocalist Otis Redding stole the show and Roddy's call to Jim Stewart of Stax Records the next day led the way to the release of Redding's first singles. He took over the weekly Record Hop at the Norwood Armory from Ron Wayne and built it into a local institution. At the urging of local fans he brought the Swingin' Medallions to town for weekly Monday night shows at the Hollywood Country Club. It soon outgrew that venue and moved to the Airport National Guard Armory, and later to the larger Oporto National Guard Armory. "Medallion Mondays" were complemented by "Tams Tuesdays" with The Tams.

Roddy was made music director at WSGN in 1963. He was a recognized national leader in breaking radio hits. Jim Taber was later hired away from Mobile's WABB to oversee programming. He gave the station's deejays the collective label of "Good Guys" and distributed a smiley-face logo. He also added a subtle echo effect to the station's entire broadcast. In 1964, while other stations were banning their music, WSGN played Beatles songs in heavy rotation from their new studio atop the City Federal Building. Roddy worked remotes from the Alabama State Fair each year and appeared three times on Dick Clark's American Bandstand.

In 1965 Roddy moved to afternoons. In 1968 he recorded a cover of "The Last Goodbye" at Boutwell Studios that became a local hit and was distributed nationally on Warner Brothers.

Roddy broke his back when he slipped while helping a stuck motorist at the Oporto Armory in 1968. After recuperating for 18 months he found no place in the sudden shift to psychedelic music. He worked in radio sales, producing commercials for local businesses like Shaia's with Don Mosely at Sound of Birmingham before moving to Columbia, South Carolina in 1972. He remained active in radio advertising and syndication, doing business as The Ruddle Agency, where he won several advertising and broadcasting awards.

Ruddle was an active member of Union United Methodist Church Chancel Choir and served as an emcee and announcer for church programs. He also performed as a member of the "Sandlapper Singers" and the "Palmetto Mastersingers".