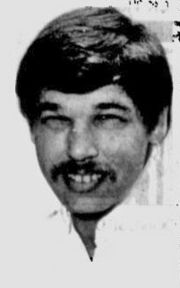 David Langner (born November 8, 1951 in Florala; died April 26, 2014) was an automobile salesman famed for his heroics for the Auburn Tigers in the 1972 Iron Bowl, in which he returned two blocked punts for touchdowns and snagged a game-ending interception.

Langer's father played at Auburn in 1948, and his older brother, Chuck was playing for Auburn when he graduated from Woodlawn High School in Birmingham. Hoping to be "different", David sought a position on Bear Bryant's Alabama Crimson Tide football team. Bryant told him he was too small to compete for spot, so he followed his brother to Auburn.

During his career at Auburn, Langner recorded twelve interceptions and holds the team record for 287 career interception return yards. His 1972 team was an underdog in the Iron Bowl at Legion Field. Late in the game, Langner was in position to recover the two blocked punts by Bill Newton that allowed the Tigers to rally and defeat Alabama. Langner's second touchdown is remembered in Gary Sanders' call: "Auburn going after it, here's the good snap...it is blocked!!! It is blocked!!! It's caught on the run!!! It's caught on the run and he's gonna score!!! David Langner!!! David Langner has scored and Auburn has tied the game!!!"

Langner was showered with attention after the game. He was named an All-SEC defensive back in 1972 and 1973, but dropped out before completing a degree. He took a job at a Birmingham auto dealership where "all [he] had to do was show up" to earn a good income while driving a free new car. He began drinking and gambling and found a higher-paying job with a Jasper coal company. He married, but lost his job when the mine closed at about the same time his first child was born. In despair he visited his former coach, Shug Jordan, at his Birmingham hospital room. Jordan secured a job for Langner as a student assistant to Doug Barfield and reinstated his scholarship. He remained on staff for Pat Dye's first season as coach and completed his degree. He was hired as head football coach at Pickens Academy in Carollton in 1982.

In his one season, Langner's Pirates went 4-5-1. Langner returned to automobile sales at a dealership in Tuscaloosa. He retired in November 2013 while being treated for renal cell carcinoma. The cancer claimed his life in April 2014.