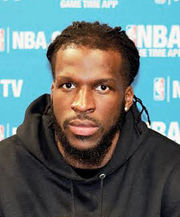 DeMarre LaEdrick Carroll (born July 27, 1986 in Birmingham) is a small forward for the Toronto Raptors of the National Basketball Association.

Carroll is a nephew of former UAB Blazers basketball coach Mike Anderson. He played on the same John Carroll Catholic High School team as Ronald Steele, going 67-3 in his last two seasons and winning back-to-back AHSAA Class 6A state championships. He was named the Most Valuable Player in the 2004 tournament and scored 27 points in that year's Alabama-Mississippi All-Star Game.

He enrolled on scholarship to Vanderbilt University in 2004, but transferred to the University of Missouri in 2007 to play for Anderson. In the summer before his first year at Missouri he was hit in the ankle by a bullet fired in a domestic dispute at a Columbus nightclub. He earned the nickname "Junkyard Dog" for his tireless, scrappy play. In his senior year, Carroll was the MVP of the Big 12 Men's Basketball Tournament and helped the Tigers reach the national quarterfinals of the NCAA tournament. Before the 2009 NBA draft it was revealed that Carroll suffered from liver disease.

Carroll was selected by the Memphis Grizzlies with the 27th overall pick and spent the season on the bench with some time with Dakota Wizards of the NBA's developmental league. In February 2011 he was traded to the Houston Rockets, but was waived that April. He was invited to training camp by the Denver Nuggets in December 2011 and appeared in four games before he was waived again. He signed with the Utah Jazz in February 2012, but did not play. In August 2013 he signed with the Atlanta Hawks, where he found a scoring touch. He was part of the starting line-up that went 17-0 in January 2015, but played hurt during the playoffs, which ended with a sweep by Cleveland in the Eastern Conference Finals.