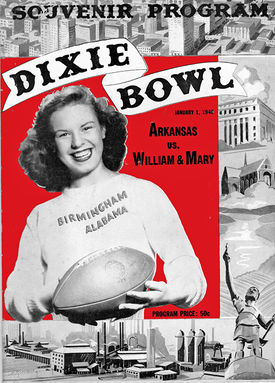 The Dixie Bowl was a New Year's Day college football bowl game held at Legion Field in Birmingham. The game was only held twice, following the 1947 and 1948 seasons, after which it was discontinued. Both games featured teams from the Southern Conference and the Southwest Conference, with the SWC representative winning each one.

The bowl was proposed by Memphis attorney Leo Burson. He saw an opportunity to add a new postseason game somewhere in the Deep South in the wake of the Rose Bowl's decision to align with the Big Nine and Pacific Coast Conferences. He conducted a survey of possible sites and selected Birmingham for its central location, large stadium, and the fact that it was a "red-hot pigskin town, steeped in the traditions of big-time collegiate football from 'way back."

The bowl's local sponsors included the American Legion General Gorgas Post No. 1 and the Birmingham Parks and Recreation Board. A 20-man advisory committee was assembled, and former Alabama All-American defensive end Holt Rast was tapped as chairman.

Backers hoped to host the first Dixie Bowl after the 1946 college football season. The Villanova Wildcats accepted a $20,000 bid to play in that game, but the 4-6 Auburn Tigers declined to participate and the contest was cancelled.

Ticket buyers for the inaugural 1948 Dixie Bowl were promised priority in securing the same seats for future games. About 20,000 fans poured into Legion Field's horseshoe on New Years Day, with temporary bleachers set up in the open north end zone to accommodate overflow. The Arkansas Razorbacks edged the William & Mary Indians in that game, finishing the year with a 6-4-1 record.

Villanova and Alabama both declined invitations to the 1949 Dixie Bowl, which ended up pitting the Baylor Bears against the Wake Forest Demon Deacons in a "Battle of the Baptists". Baylor won the game 20-7 in front of 15,000 fans , who were swallowed up in the newly-enlarged stadium.

The Southeastern Conference passed a resolution during that year restricting its member teams to playing only in the Sugar, Orange and Cotton Bowl games. The bowl organizers were joined by the Birmingham City Commission in protesting that policy, but it was not reversed. The action was blamed for the decision announced in July 1949 to cancel the game for January 1950. Some hope was held out that the bowl would return, but the next postseason bowl game held at Legion Field would be the 1977 Hall of Fame Classic.