This article is about the geologist. For others with similar names, see Douglas Jones (disambiguation). 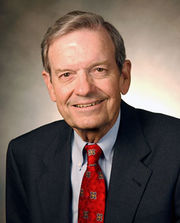 Douglas Epps Jones (born May 28, 1930 in Tuscaloosa; died April 2, 2010 in Tuscaloosa) was professor of geology and longtime administrator at the University of Alabama.

Jones, the son of Walter Bryan Jones, graduated from Alabama in 1952 with a bachelor of science in geology. He then served with the Army Corps of Engineers in France for two years. He went on to earn a Ph.D. in geology in paleontology at Louisiana State University in 1959, beginning his teaching at Alabama in the Department of Geology-Geography in 1958. He became head of that department before being appointed dean of the College of Arts and Sciences on 1969.

Jones held that position until 1984 when he was made director of UA Museums and dean of University Libraries. In 1988 he filled in for two years as acting vice-president for academic affairs. After retiring in 1996 he continued to serve the school, re-organizing and cataloging the 10,000 fossil invertebrate specimens at the Alabama Museum of Natural History.

Jones wrote numerous pieces about geology, paleontology, and history. He chaired the DeSoto Trail Commission and the Alabama DeSoto Commission and was a trustee of the Southern Environmental Law Center in Charlottesville, Virginia and chairman of the board for the Nature Conservancy of Alabama.

Jones died following a brief illness in 2010; he was survived by his wife, Bonnie, three children and six grandchildren. He was a longtime elder at the First Presbyterian Church of Tuscaloosa and is buried at Maple Hill Cemetery in Huntsville.