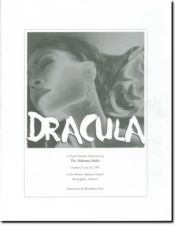 Dracula is an original ballet, based on Bram Stoker's 1897 vampire novel Dracula, and choreographed by Wes Chapman and Roger Van Fleteren for the Alabama Ballet. The work debuted in October 1997 at the Alabama Theatre.

The Ballet commissioned an original score, by Pensacola organist and composer Thomas Helms. Helms wrote the score for Dracula specifically for the "Big Bertha" Mighty Wurlitzer organ at the Alabama. He has also performed his work at each of the Ballet's performances, including those at Montgomery's Davis Theater following its sold-out Birmingham debut. It was restaged the following year to smaller crowds.

Chapman danced the lead role in the premiere, with Van Fleterer playing the scene-stealing lunatic Renfield. Original sets were designed by Douglas Stewart and costumes by Sally Schissler.

The ballet was revived on October 13, 2006 at Samford University's Wright Center with Kyle Seguin as Dracula and Brazilian Mark Asturias debuting with the company in the role of Renfield. David Bauser alternated in that plum role during the show's run. Helms again played the organ score, this time with recorded orchestra and piano accompaniment.

The Alabama Ballet performed the ballet back at the Alabama Theatre, where it originally debuted, for two performances, on October 28 & 31, 2010. This time Dracula was played by Republic of Georgia native Nukri Mamistvalov. The Alabama Ballet donated one-third of all proceeds from ticket sales to the Leukemia and Lymphoma Society of Alabama.

Other ballet versions of the Dracula story date back to Laslo Szilagyi's Prince des tenebres at the Budapest Opera in 1899. Other notable versions include one by Katherine Litz with music by Charles Ives in 1959, and one incorporating African dancers and drummers choreographed by Kim Tuttle in 1992.