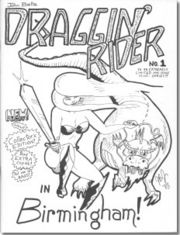 Draggin' Rider in Birmingham is a black and white, magazine-sized, 16-page comic book written and illustrated by John Bell of WMJJ in 1988. The comic features Waa-Tabayb, a scantily clad warrior princess from "another time . . . another place." She rides a dragon named Uh-Glee that is "so old, it is starting to drag," hence she is known as Draggin' Rider, a parody of Dragon Rider, presumably referring to Anne McCaffery's Dragonriders of Pern.

Waa-Tabayb and her mount are brought to Birmingham by a cosmic storm. They appear above Red Mountain where she mistakes Vulcan for a giant attacking her with a Jello Pudding Pop (the torch then covering the spear he holds). She then lands at the Birmingham Smurf Club (a parody of the Birmingham Turf Club) and finds the abandonded track inhabited by a few members of the defunct Birmingham Stallions football team. She asks them where she can "experience all the bizarre wonders" of this new world. They direct her to Southside.

Hitchhiking there, she is picked up by a group of Southside eccentrics. Stranded when the eccentrics flee after discovering one of their number draws comic books, she makes her way downtown seeking intelligent life. She finds none at Birmingham City Hall, but is confronted by the Birmingham Police Department. One officer tells her she "can't run around dressed like that outside 'a Sammy's Go Go." After a one-page skirmish, Waa-Tabayb has had enough and vows to find her place in this world. She ends up giving "draggin' rides" at ConTinuity, a Birmingham science fiction and fantasy convention.

Draggin' Rider was sold at some local stores, such as Lion & Unicorn. The cover has no price printed on it, although one issue bought new in 1988 has a $1 price tag attached.