Forbes Piano Company (formerly E. E. Forbes & Sons Piano Company) was a piano and organ dealer and music retailer founded in 1889 by E. E. Forbes. The store, which was Birmingham's only Steinway & Sons dealer, liquidated its stock and closed in June 2009.

Forbes founded his business in Oxford after a few years as an employee and junior partner of music dealer Gilbert Carter. He moved the store to downtown Birmingham a few years later. Forbes treated the business as a calling, often sacrificing profits to get more instruments in the hands of young musicians. His newspaper advertisements repeated his belief that cultivating an interest in music would reduce crime. Forbes became a favored dealer for many area churches and offered space in their large downtown showroom for local piano instructors to stage recitals.

Already the city's primary dealer for sheet music, the store stocked a large variety of vinyl recordings as they became available. Forbes was the city's exclusive dealer for popular Paramount recordings. Other departments of the four-story downtown store sold gifts, furniture and Kelvinator ranges and refrigerators. 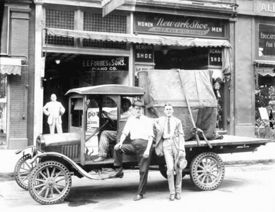 In the late 1930s Forbes was one of the few stores which welcomed both black and white customers to try out instruments and listen to recordings. It was there that a young Sonny Blount (Sun Ra) wiled away numerous afternoons playing for clerks and customers and copying sheet music into notebooks. He was loaned a celeste and later purchased a Hammond Solovox from Forbes.

Pianist Vladimir Horowitz performed a small in-store concert during his visit to Birmingham. Jim Brickman bought a Yamaha piano from Forbes for his home after playing it twice on tour in Birmingham. In 1937, Forbes employees Johnnie Catalina and Larry Yester founded a 25-person Forbes Accordion Band which performed around the country as ambassadors for the store.

At its peak, Forbes had 25 branches around Alabama. As roads were improved and customers could come to the stores rather than salesmen having to go to the customers, the company cut back to the Birmingham and Montgomery markets. Many branches were sold to former store managers. When Forbes died in 1959, he left equal shares of the business to his five children. It was initially managed by his son Kenneth Forbes until he died in 1968, then by another son, French Forbes.

In 1996, seeing declining traffic to their historic downtown location, Forbes sold its five-story building at 1914 4th Avenue North and moved to Homewood. The old building was bought by the Burr & Forman law firm, which relocated to it.

In 1999, a grandson, French Forbes, Jr, and great-grandson, French Forbes III, bought the company from other family shareholders. Forbes, Jr acted as President and CEO while Forbes III was Vice-President and general manager. In 2005 the store boasted five locations in Alabama. The flagship store closed in 2009, coinciding with French Forbes, Jr's retirement and following the death of Forbes III's adopted daughter Emma Grace. After the retail store closed the family continued to act as local dealer for the Allen Organ Company. The Montgomery showroom was liquidated in August 2010.