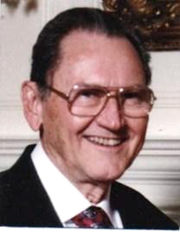 Edmond Scott Sprague (born April 10, 1916 in Ensley; died July 29, 2013 in Birmingham) was the founder and owner of Wahouma Building Supply in Birmingham.

Sprague, a grandson of pioneer Nimrod Scott, graduated from Ensley High School in 1934 and earned a business degree at Alabama Polytechnic Institute in Auburn in 1939. He was a member of the Auburn Tigers football team as team manager during his last two years, traveling with the team to the Orange and Bacardi Bowls.

Sprague began his business career as an accountant for U.S. Steel. In 1942 he enlisted in the U.S. Navy for service in World War II. He trained at Cambridge, Massachusetts before being asssigned to the USS Wyoming as Chief Communications Officer. While on leave he married the former Mildred Foster.

After the war, with help from his father-in-law, Sprague opened his successful building supply company in the Wahouma neighborhood.

Sprague was an active member of the Downtown Optimist Club and Canterbury United Methodist Church, and served as president of the Alabama Building Material Association.

Sprague died in 2013. He was survived by his children, Rick and Dana, and three grandchildren. He was buried at Elmwood Cemetery.