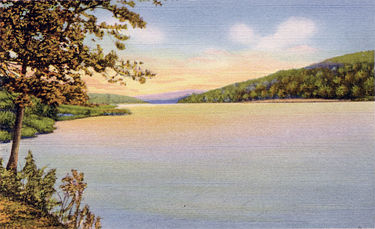 Edgewood Lake was an artificial lake in Shades Valley created by damming Shades Creek at Green Springs Highway in Homewood. Lakeshore Drive was so named because it paralleled the northern shore.

The dam was first announced in June 1910 as part of the proposed Birmingham Speedway to be constructed for the Birmingham Motor Club. The version finally realized was announced in 1912 by the development team of Stephen Smith and Troupe Brazelton, who had formed the Edgewood Highlands Land Company and built the Birmingham & Edgewood Electric Railway (1909) connecting their developments with the city of Birmingham.

In 1912 the streetcar line was extended from Broadway and Shades Road to a point on Old Columbiana Road just shy of where it crossed Shades Creek. At the crossing, which was about halfway between the present Green Springs Highway and I-65, they planned to dam the creek, creating a lake "five times the size of East Lake, which would serve as the centerpiece of a recreational resort of the type commonly used to attract home sales and businesses to a particular streetcar suburb.

A log clubhouse was erected for the Edgewood Country Club the same year. It was purchased two years later by the Birmingham Motor and Country Club, headed by Charles Rice, and preparations for creating the lake were renewed. The club lobbied for the paving of the streetcars right-of-way to allow for Birmingham's new elite class of motorists to make the journey into the valley. They planned a "motor speedway" circuit around the lakebed and sponsored a barbecue in the summer of 1914 to drum up new memberships.

By the fall of 1915 the lake, 6,500 feet long and no more than 750 feet wide at its western end, covering over 117 acres, was filled and stocked with bass and bream for fishing. It was the signature feature of the club's 400-acre property. The Birmingham Motor and Country Club dissolved in 1923. The clubhouse was subsequently opened to the public by Grapico bottler Raymond Rochelle, who added parking areas and a dance pavilion to the offerings at what was then known as Edgewood Park.

Through the 1920s and 30s the lake attracted crowds of bathers, boaters and picnickers. Blue Hole, located on Griffin's Brook, which fed the lake from the north, attracted skinny dippers. Fishermen carried their cane poles on the streetcar and spent weekends filling buckets with fresh fish. It was also the site of large gatherings and celebrations. The Birmingham Elks Lodge held their Labor Day celebration here, and the Ku Klux Klan initiated hundreds, including Hugo Black, on the shore of the then-dry lake bed at Edgewood Park in 1923.

The lake was dry because torrential rains had overcome the dam earlier that spring. The same thing happened again in 1933, emptying the lake and causing flooding downstream. In 1934, Edgewood Park was joined by Homewood's Shades Creek Park, at the present site of Brookwood Village mall, in providing recreational opportunities in the valley. A walking path connected the new public park with the circuit around the southern shore of Edgewood Lake.

In 1935 Jefferson County repaired the dam, restoring the lake. The vacant clubhouse, then owned by Investors Syndicate, a group based in Minneapolis, was demolished in 1938 and the land deeded to the County, which had difficulty maintaining it. In 1946 they turned over 100 acres of the again-dry lake bed to Howard College. Attempts by residents to have the lake restored failed and redevelopment of the area was allowed to proceed.

A smaller "Edgewood Lake" briefly reappeared as a result of heavy rains in January 1954.