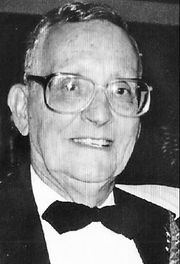 Emmett Boozer Weaver (born October 13, 1925 in Anniston; died April 21, 2014) was the long-time entertainment editor for the Birmingham Post-Herald and a co-founder of the Summerfest theater series.

Weaver was the son of Frank Cosby and Sara Emmett Boozer Weaver of Anniston. He graduated from Anniston High School and entered the University of Alabama as a pre-medical major, following in his father's footsteps. He joined the U.S. Navy medical corps for service in World War II and, after returning to Tuscaloosa, changed his major to journalism and communications. He graduated in 1948 and took a job as editor of the Pell City News-Aegis. After marrying the former Bobbye Jo Williamson he returned to the University to pursue a master's degree.

Weaver also served in the Naval Reserves and was activated for service in the Korean War. He was sent to Camp Lejeune, North Carolina as a medical trainee with the First Marines until his release. Afterward he took a job with the Post-Herald as religion editor, and then switched to amusement and entertainment. He edited the Week-Ender newspaper supplement, which evolved into the Kudzu. Weaver continued editing that supplement until his retirement in 1983. He worked with director James Hatcher and Mayor David Vann to create the Summerfest series in 1979.

Weaver won an Associated Press award for his coverage of racial tensions at the University of Alabama.