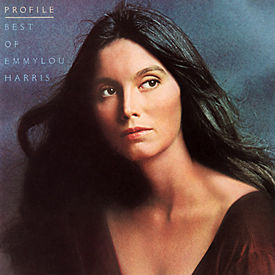 Emmylou Harris (born April 2, 1947 in Birmingham) is a country music singer-songwriter and musician. Aside from her work as a solo artist and bandleader, she is a sought-after backing vocalist and duet partner, working with numerous big-name artists.

Harris was the daughter of a career Marine. She was born at East End Memorial Hospital in Birmingham, but spent her childhood in North Carolina, and then in Woodbridge, Virginia, where she graduated from Gar-Field Senior High School as class valedictorian and won a drama scholarship to the University of North Carolina at Greensboro. This is when she began to study music seriously, learning to play the songs of Bob Dylan and Joan Baez on guitar.

Harris married fellow songwriter Tom Slocum in 1969, and recorded her first album the following year, Gliding Bird, on Jubilee Records (reissued in 1979 on Emus Records). Shortly thereafter, the couple got divorced, and Harris and her newborn daughter Hallie moved-in with her parents in Washington, D.C.

Harris soon returned to performing, as part of a trio with local musicians Gerry Mule and Tom Guidera. One night in 1971, members of the country rock group The Flying Burrito Brothers happened to be in the audience, including former Byrds member Chris Hillman, who had taken over the band after the departure of its founder, Gram Parsons. Hillman was so impressed by Harris that he briefly considered asking her to join the band. Instead, in 1972, Hillman ended up recommending her to Parsons, who was looking for a female vocalist to work with on his first solo album. Harris toured as a member of Parsons' "Fallen Angels" band, and in 1973, Harris returned to the studio with Parsons to record Grievous Angel. Parsons died in a motel room near what is now Joshua Tree National Park on September 19, 1973, from an overdose of drugs including alcohol. (Harris reflected on Parsons' death in her 1975 composition "Boulder to Birmingham".)

Emmylou met Canadian producer Brian Ahern, who produced her major label debut album, released in 1975 on Reprise Records, entitled Pieces of the Sky. The album included a number of cover songs, including the Beatles' "For No One" and Harris's first hit single, the Louvin Brothers' "If I Could Only Win Your Love". She created The Hot Band, a group of studio and touring musicians that included Elvis Presley band alumni Glen D. Hardin, Hank DeVito, and James Burton.

Harris' subsequent albums, Elite Hotel (1975), Luxury Liner (1977), and Quarter Moon in a Ten Cent Town (1978) were all country hits, but also had appeal for rock listeners. While country music was experiencing crossover success at the time, the approach of many country artists was to try to marry their music with smooth, L.A.-style pop; Harris, however, had more of a rock and roll interest, so she aimed her music in a bit more rockish direction.

In addition to her own solo work during this period, Harris began a number of ongoing collaborative relationships with other artists, many of which she would revisit throughout the course of her career. A Christmas album, "Light of the Stable," was released in 1979; its title track featured backing vocals by Dolly Parton, Linda Ronstadt, and Neil Young. From the mid-1970s on, Harris had begun working with all three artists, recording two Trio albums with Parton and Ronstadt (as well as a number of singles), a duet album with Ronstadt, and a number of various projects with Young. In addition, her vocals were prominently featured on Bob Dylan's 1975 Desire album. She also worked with The Band during this period, appearing in their film The Last Waltz. In 1977, Harris married Brian Ahern and had another daughter, Meghann in 1979. This marriage ended in divorce in 1984.

In 1980, she recorded "That Lovin' You Feelin' Again" with rock legend Roy Orbison, for which they would win the Grammy Award for best vocal duo, and in 1981, she reached #37 on the Billboard pop charts with a cover of "Mister Sandman" from her Evangeline album. (The album version of the song featured harmony by Dolly Parton and Linda Ronstadt, but neither Parton's nor Ronstadt's record companies would allow their artists' vocals to be used on the single, so Harris re-recorded the song, singing all three parts.)

1983's White Shoes was an eclectic pairing of the rockish reading of "Diamonds Are a Girl's Best Friend" with a remake of the Donna Summer hit "On the Radio". Though not previously noted for her songwriting, Harris wrote all the songs on her 1985 album, The Ballad of Sally Rose, a somewhat autobiographical piece, based on her relationship with Parsons, which Harris herself described as a "country opera". Harris married musician Paul Kennerley in 1985. This marrriage ended in divorce in 1993.

In 1987, she teamed up with Dolly Parton and Linda Ronstadt for their long-promised Trio album. The album was nominated for three Grammy awards (it took the award for "Best Country Collaboration"), reached the top ten on both the pop and country charts, and launched four hit singles. On Angel Band, another 1987 album, with traditional religious songs, she worked, among others, with rising country star Vince Gill.

In the early 1990s she dissolved The Hot Band, and partnered with acoustic musicians (Sam Bush (fiddle, mandolin & vocals), Roy Huskey, Jr (bass & vocals), Larry Atamanuik (drums), Al Perkins (banjo, guitar, dobro & vocals), Jon Randall (guitar, mandolin & vocals), whom she named The Nash Ramblers. They recorded a Grammy-winning live album in 1992 at Nashville's Ryman Auditorium that led to the $8 million restoration of the facility into a premium concert and event venue. It was her last album with Reprise Records.

Harris started receiving less airplay as mainstream country stations began shifting their focus to the youth-oriented "new country" format. While her recent albums had done reasonably well, her chart success was on the wane. Switching to Elektra Records, her 1993 Cowgirl's Prayer album, while critically praised, received very little airplay, and its single, "High Powered Love" failed to chart, prompting her to shift her career in a new direction.

In 1995, Harris released one of the most critically acclaimed albums of the decade, Wrecking Ball, produced by Daniel Lanois, best known for his work with U2, Peter Gabriel and Bob Dylan. An experimental album for Harris, to say the least, the record included Harris' rendition of the Neil Young-penned title track (Young himself provided guest vocals on two of the album's songs), Steve Earle's "Goodbye," Julie Miller's "All My Tears", Jimi Hendrix's "May This Be Love", Kate and Anna McGarrigle's "Goin' Back to Harlan" and Gillian Welch's "Orphan Girl". U2's Larry Mullen, Jr showed up to play drums for the project. The album received virtually no country airplay whatsoever, but did bring Harris to the attention of alternative rock listeners, many of whom had never listened to her music before. The following year, she appeared on Willie Nelson's moody, instrumentally sparse Teatro album, which was also produced by Lanois.

Her 1999 Red Dirt Girl album was produced by Lanois protegé Malcolm Burn and, for the first time since The Ballad of Sally Rose, contained a number of Harris' own compositions. Like Wrecking Ball, the album's sound leaned more toward alternative rock than country. Also in 1999, Harris released a second Trio album with Parton and Ronstadt, Trio 2 (which was actually recorded in the early 1990s, but remained unreleased for five years, due to record label disputes and conflicting schedules and career priorities of the three artists). Harris and Ronstadt released a duet album, Western Wall: The Tucson Sessions the following year.

In 2000, Harris guested on alternative country singer Ryan Adams' solo debut Heartbreaker. The same year she joined an all star group of traditional country, folk and blues artists for the T-Bone Burnett produced soundtrack to the Coen Brothers film, O Brother, Where Art Thou?. A documentary/concert film, Down from the Mountain, featuring the artists performing music from the film and other songs at the Ryman Auditorium. Harris and many of the same artists took their show on the road for the Down from the Mountain Tour in 2002.

Harris released Stumble into Grace, her follow-up to Red Dirt Girl in 2003, and like its predecessor, it contained mostly self-penned material. In 2004, Harris led the Sweet Harmony Traveling Revue tour with Gillian Welch and David Rawlings, Buddy Miller and Patty Griffin. They performed singly and together and swapped instruments.

In 2005, Harris worked with Conor Oberst on Bright Eyes' release, I'm Wide Awake, It's Morning, performing backup vocals and harmonies on three tracks. In July, she also joined Elvis Costello on several dates of his U.S. tour, performing alongside Costello and his band on several numbers each night. Emmylou and Costello recorded a version of Costello's song, "The Scarlet Tide", from the soundtrack of the movie, "Cold Mountain". July also saw the release of The Very Best of Emmylou Harris: Heartaches and Highways, a single-disc retrospective of Harris's career, on the Rhino Entertainment label.

This same year, Harris appeared as a guest vocalist on the widely acclaimed Prairie Wind, the latest album by Neil Young. She appeared in the Jonathan Demme documentary-concert film Neil Young: Heart of Gold, released in 2006.

All the Roadrunning, an album of collaborations with former Dire Straits frontman Mark Knopfler, was released on April 24, 2006 (April 25 in USA), and supported by a tour of Europe and the USA. The album was a commercial success, reaching #10 in the UK and #17 in the USA.

Selections recorded during the All the Roadrunning tour performance at the Gibson Amphitheatre were released as a CD/DVD package entitled Real Live Roadrunning on November 14, 2006. In addition to several of the compositions that Harris and Knopfler recorded together in the studio, Real Live Roadrunning features solo hits from both members of the duo, as well as a few classic tracks from Knopfler's days with Dire Straits.

Harris was inducted into the Country Music Hall of Fame in 2008.

In 1997 & 1998, Harris performed in Sarah McLachlan's Lilith Fair, promoting feminism in music. Since 1999, Harris has been organizing an annual benefit tour called Concerts for a Landmine Free World. All proceeds from the tours support the Vietnam Veterans of America Foundation's efforts to assist innocent victims of conflicts around the world. The tour also benefits the VVAF's work to raise America's awareness of the global land mine crisis. Artists that have joined Harris on the road for these dates include Mary-Chapin Carpenter, Bruce Cockburn, Steve Earle, Joan Baez, Patty Griffin and Nanci Griffith.

Emmylou is also a supporter of animal rights and an active member of People for the Ethical Treatment of Animals.

Awards and other honors