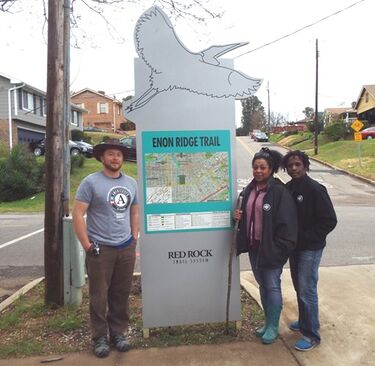 The Enon Ridge Trail (formerly the Dorothy Spears Greenway at Village Creek) is a 1.07-mile multi-use trail which forms a portion of the Village Creek Greenway in the Red Rock Ridge & Valley Trail System. It opened in 2013 as one of the first segments of the regional trail network to be developed.

The trail follows a former railroad bed from Dorothy Spears Park in East Thomas, eastward in a loop parallel to Old Bankhead Highway, where it forms part of the boundary between the East Thomas and Enon Ridge neighborhoods. It proceeds south alongside the Knesseth Israel and Beth-El Cemetery, and then under I-59/20 to Parker High School in Smithfield, where it connects to the 3rd Street North Trail and the Birmingham Civil Rights Heritage Trail.

In March 2018 the Enon Ridge Trail was adopted by the Dynamite Hill-Smithfield Community Land Trust, which conducts an annual clean-up during Earth Week. In 2020 the Community Land Trust partnered with the Friends of Dynamite Hill to plant the Alexis Murphy "Murph" Memorial Guerilla Garden along the trail, featuring perennial herbs, flowers and fruits as part of a broader project to develop a community food forest on the trail.