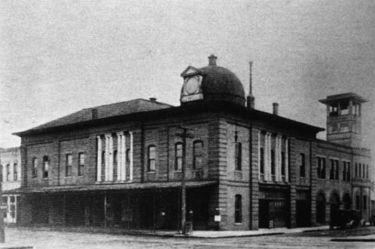 The Ensley City Hall was constructed for the Government of Ensley in 1900 on the corner of Avenue E and 21st Street in Ensley. The municipal portion of the building stretched down 21st Street and housed the mayor's office, Ensley Police Department, municipal courts and the city jail.

The two-story building featured a cupola with a clock on the front corner and a belltower at the 21st Street end. The wing facing Avenue E was originally used as an opera house. Space for shops was included on the ground floor of both wings, but most of those were converted for use by the Ensley Fire Department before 1911.

The city of Ensley, with a population then of 6,000, was merged with Birmingham in 1910 under the Greater Birmingham legislation. The former city hall building was demolished before 1928, when the current 1-story commercial row was constructed.